Berlin (VNA) – The northern province of Thai Binh has employed a wide range of preferential policies for foreign investors, including those from Germany, said Secretary of the provincial Party Committee and Chairman of the provincial People’s Council Nguyen Hong Dien. 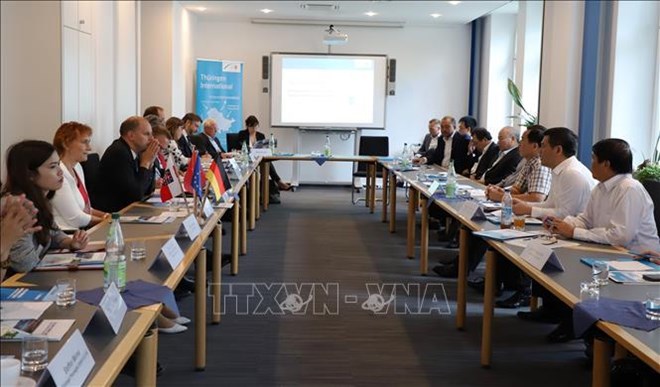 Chairman of the provincial People’s Committee Nguyen Hong Dien and his entourage have a meeting with  authorities and enterprises from Thüringen state. (Photo: VNA)

He made the statement while meeting with authorities and enterprises from Thüringen state, the world’s leading wind turbine maker Enercon and the Vietnamese Embassy in Germany during his visit to Europe from August 18-25.

Thai Binh is home to 12 industrial parks, 50 industrial complexes and one economic zone, with favourable transport conditions and an abundant labour force. The province also has huge potential to develop agriculture, mining, renewable energy, leather shoes, garment and textile, among others.

Meanwhile, Thüringen has long-lasting relations with Thai Binh since the 1950s through agricultural projects and the ties will be enhanced after Vietnam and the EU’s agreements on free trade and investment protection take effect, Dien noted.

Working with Enercon, he said he hoped the corporation would seek investment opportunities in building an equipment production plant and a human resources training centre in the locality, adding several wind power projects have been developed in the province to take advantage of the 54-kilometre coastline.

Enercon and other businesses in Thüringen state expressed their interest in investing in the locality.

During his trip to Europe, Dien and his entourage will also study high-tech farming and renewable energy in Switzerland.-VNA