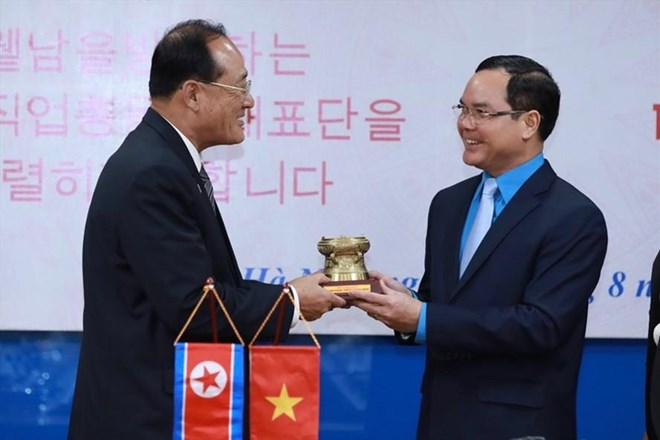 At the function, Khang stressed the VGCL values its traditional friendship with the GFTUK and wants to enhance the ties in line with benefits of each side.

He recommended the two bodies exchange knowledge and experience on training trade union personnel, collective bargaining targeting the private sector, as well as on their activities in the fields suitable for the two countries’ cooperation like tourism, agriculture and construction.

Khang unveiled that the VGCL and GFTUK will work together to suggest suitable and meaningful activities marking the 70th anniversary of diplomatic relations between Vietnam and the Democratic People’s Republic of Korea (DPRK) in 2020.

He said he believes under the leadership of the Workers’ Party of Korea and the GFTUK, the DPRK’s trade union movements will achieve further success in building socialism, developing the nation, and improving local people’s living standards.

For his part, the DPRK official highlighted the long-standing ties shared between the two trade unions that have been fostered over time, noting that his current visit aims to enhance such relationship.

He also affirmed a consistent viewpoint of further expanding the ties in line with the relations shared between the two countries and their Parties.-VNA