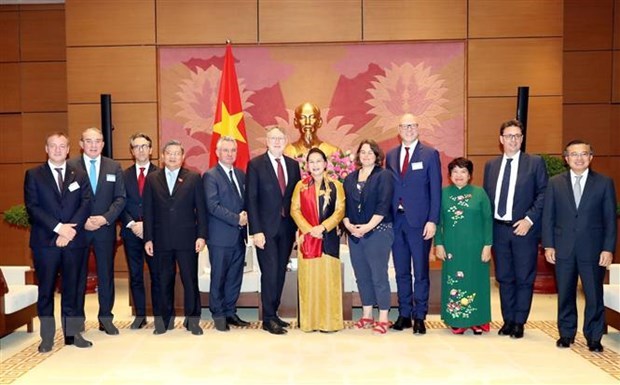 Chairman of the European Parliament (EP)’s Committee on International Trade (INTA) Bernd Lange (sixth from left) has a meeting with NA Chairwoman Nguyen Thi Kim Ngan during his trip to Vietnam. (Photo: VNA)

Lange told the press on October 31 that during his stay, he had the chance to discuss the agreements with high-ranking leaders, ministries, sectors and the business community so that he and the INTA could carry out a thorough evaluation of Vietnam’s ability to implement the pacts in the future.

He particularly laid stress on the meeting with Chairwoman of the National Assembly (NA) Nguyen Thi Kim Ngan, during which both sides talked about Vietnam’s progress to realise the two deals in tandem with the consideration and approval of three conventions of the International Labour Organisation (ILO).

The Vietnamese parliament has already adopted ILO Convention No. 98 concerning the application of principles of the right to organise and to bargain collectively, he said, adding that Convention No. 105 on the abolition of forced labour and Convention No. 87 on freedom of association were due for consideration.

He described Vietnam’s revised Labour Code 2019, which is expected to be passed at the 14th NA’s ongoing 8th session, as an important step to protecting social rights, safety and security.

Responding to reporters’ queries, the INTA Chairman said the EP sees the implementation of ILO conventions and cyber security law as important factors as they play an important role in assuring the rights and benefits of people, workers and businesses.

Voting to pass the deals will first be held at the European Commission (EC) on January 21, 2020 before a second vote at the EP’s plenary session in February 2020 for official ratification of the pacts, he added.

Meanwhile, Zahradil said the signing of the two deals indicated the sound ties between the EU and Vietnam.

Suggesting Vietnam and the EU grasp every opportunity to facilitate the ratification of the EVFTA and IPA, Zahradil said he is looking forward to positive results in February next year./.