Ha Nam (VNA) – A business delegation from the Japanese prefecture of Hyogo worked with authorities of the northern province of Ha Nam on November 5 to study the local investment environment. 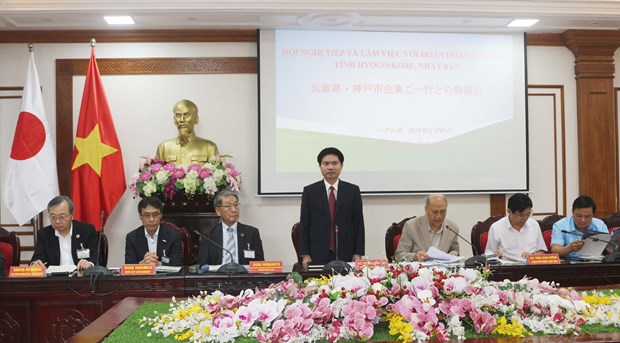 He said Ha Nam has synchronous infrastructure and convenient transportation connectivity with other provinces and cities as well as abundant human resources and inexpensive labour costs and land rents.

When investing in the province, businesses will be ensured in terms of electricity, water, employment and security, Huy added.

The official went on to say that Ha Nam considers Japan a main partner in investment attraction.

Currently, Japan ranks second in foreign investment in the province with nearly 100 projects in various fields such as mechanical engineering, automobile industry, motorcycles, and electronic equipment, he noted.

The Vice Chairman also highly evaluated the investment and cooperation capacity of Japanese enterprises and hoped more firms from the country will invest in Ha Nam.

On behalf of the Hyogo businesses, Shiro Muramoto, chairman of Muramoto Industry group, hailed the investment environment in Ha Nam and said many Japanese companies are operating effectively in the province.

He added that a number of businesses from Hyogo prefecture are keen to invest in Ha Nam and hoped the province will create optimal conditions for them to study investment opportunities.

After the working session, the Japanese business delegation visited a number of Japanese firms operating at the province’s industrial parks./.