Havana (VNA) – A Vietnam Day was held as part of the 2019 Havana International Trade Fair (FIHAV), which is taking place in Cuba from November 4-8. 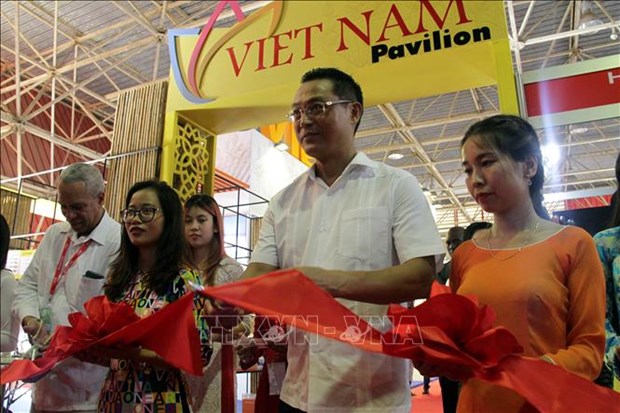 Vietnamese Ambassador to Cuba Nguyen Trung Thanh (second from right) cut the ribbon to kick off the event. (Photo: VNA)

Numerous representatives from ministries, departments and businesses of the two countries and international friends were present at the event.

Deputy head of the Trade Promotion Agency under the Ministry of Industry and Trade Bui Thi Thanh An said products displayed by Vietnam at the event are the country’s strengths such as construction material, farm produce, processed food, and consumer products.

She added that the new trade agreement signed between Vietnam and Cuba on the occasion of the visit to Vietnam by President of the Council of State and Council of Ministers of Cuba Miguel Diaz Canel Bermudez in November 2018 was significant for the two countries to enhance their trade ties.

The official also affirmed support for Vietnamese businesses to access the Cuban market, promote Vietnamese brands, and study local demands to establish a network of goods distribution in Cuba and the Caribbean region.

Attending the event, Cuban First Deputy Minister for Foreign Trade and Investment Antonio Carricarte noted that the number of Vietnamese businesses attending the FIHAV 2019 doubled that of the previous events.

He also underlined the importance of Vietnam’s investment projects in Cuba and said Cuba is willing to work as a bridge for Vietnamese products to reach the Caribbean region.

FIHAV is the largest annual trade fair in Central America and the Caribbean. This year’s event brought together about 4,000 exhibitors from more than 60 countries and territories around the world./.