Hanoi (VNA) – The escalating US-China trade war has made Vietnam’s trade gap with China widen to 29.5 billion USD in the first 10 months of 2019, up 47.9 percent from the same time last year, according to insiders. 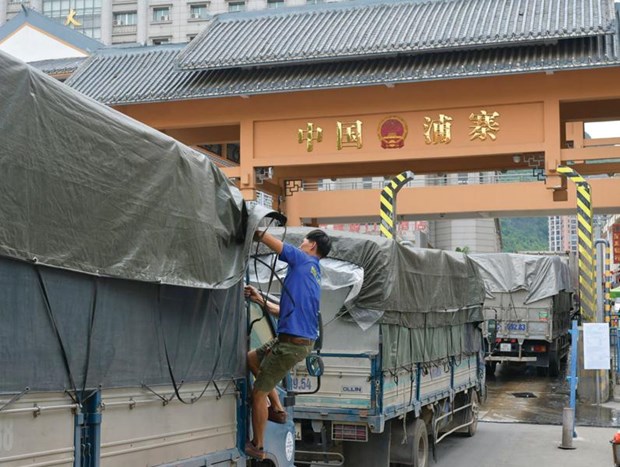 The escalating US-China trade war has made Vietnam’s trade gap with China widen to 29.5 billion USD in the first 10 months of 2019. (Photo: baodautu.vn)

A report from the Ministry of Planning and Investment showed that Vietnam exported 32.5 billion USD worth of products to China in the ten-month period, a year-on-year fall of 2.9 percent, while its spending on Chinese products surged 16.1 percent to 62 billion USD.

China is the country’s largest trade partner, and Vietnam often witnesses a trade deficit with its northern neighbour, but this year it has been growing at lightning speed.

Former Deputy Director of the Central Institute for Economic Management (CIEM) Vo Tri Thanh, and Head of the Ho Chi Minh City Institute for Development Studies Tran Hoang Ngan, believed that Chinese enterprises have increased shipments through Vietnam to avoid tariffs raised from trade tensions with the US, a process known as transshipment that is contributing to the trade imbalance between China and Vietnam and inflating Vietnam’s export figures.

Goods imported from China are then repackaged under “Made in Vietnam” labels before they are shipped to other nations, especially the US, to evade US tariffs, they said.

Most recently, the General Department of Vietnam Customs seized a suspicious aluminum shipment worth 4.3 billion USD that was heading to the US and other countries. This was the largest place-of-origin fraud ever uncovered in the country.

The shipment belonged to a corporation which had its own production line but imported aluminum ingots, bars and semi-finished products from abroad to export to the US.

Vietnam’s aluminum exports to the US were subject to a duty of about 15 percent; however products originated from China were levied at up to 375 percent. That is the reason why many products are being disguised with “Made in Vietnam” tags to try to evade US anti-dumping duties.

Economists as well as many state management authorities like the Ministry of Planning and Investment and the Ministry of Industry and Trade have given warnings about fake product origins. They stressed the need to keep a close watch on imports from China so and respond quickly amidst the intense US- China trade disputes.

Experts also voiced their concern that the trade deficit with China could put Vietnam in a trade conflict with the US, not to mention its impacts on reputation of Vietnamese products, and risk of increasing trade protection measures from foreign countries./.