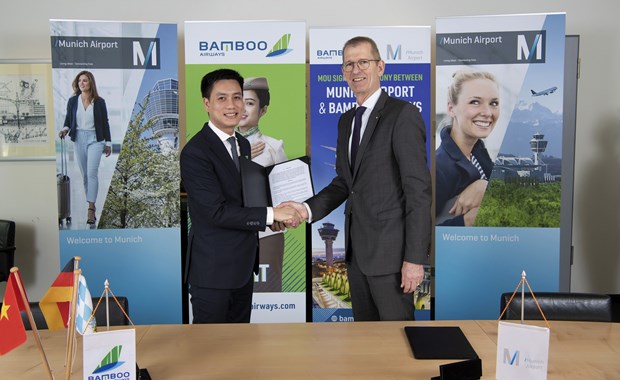 The announcement follows a Memorandum of Understanding (MoU) inked between the airline and Munich Airport earlier this week.

The two direct routes will operate from July with one round-trip flight per week from Hanoi and two from HCM City.

The airline said it will use Boeing 787-9 Dreamliners – the most modern, fuel-efficient wide-body aircraft as of now, with numerous outstanding utilities and services, for these routes.

Munich Airport is the main gateway to the city of Munich – Germany’s third-largest city after Berlin and Hamburg, and is one of the most important economic, transportation and cultural centres in the country. Munich is both the second largest airport in Germany and the only 5-star airport in Europe.

Established in 2017, Bamboo Airways is the first private airline in Vietnam to aim at providing 5-star services.

In 2020, the airline plans to expand its network to 85 routes, including 60 domestic routes and 25 international destinations. Bamboo Airways’ fleet is expected to reach 50 aircraft, including 12 wide-body aircraft Boeing 787-9 Dreamliners./.