Hanoi (VNS/VNA) – The Vietnam Real Estate Association has proposed the Government develop measures with a focus on credit and tax support, together with improving the legal framework for new property products so as to aid the property market to overcome this difficult period. 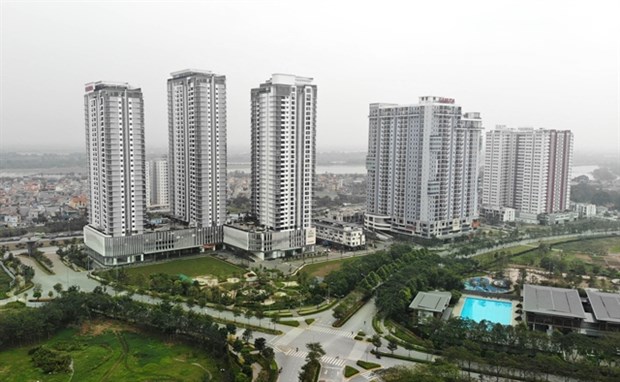 The Vietnam Real Estate Association has proposed the Government develop measures with a focus on credit and tax support to aid the property market. (Photo: VNA)

In a recent document sent to Prime Minister Nguyen Xuan Phuc, the association pointed out the real estate market had seen signs of decline since the end of last year due to crashes caused by the lack of legal framework for the development of new property products and the recent outbreak of the novel coronavirus (COVID-19).

Many real estate developers were at risk of falling into bankruptcy as sales of their projects and the construction of new projects were both stagnant, according to the association.

The association proposed several measures to support the property market.

First, focus should be placed on credit and tax support measures.

Tax incentives were also proposed, including a six-month extension for payment to the State budget for one year after COVID-19 was brought under control, exemption of fines for late payment when companies paid taxes fully and reductions in value added tax.

The association said that it was also vital to improve the legal framework on tourism property to promote healthy and stable development of the real estate market, including for products like shophouses and shoptels.

Many social housing project developers like AZ Thang Long, Hoang Quan, Capital House and Eurowindow Holding said that they were facing difficulties in sales as buyers were not provided with preferential loans, according to the association.

As the demand for the social housing segment remained huge in Vietnam, the association proposed the Government to increase credit support for low-income earners in buying homes through two channels, namely the Vietnam Bank for Social Policies and commercial banks with State holdings.

The administrative procedure reforms must also be hastened to save time and money for businesses and citizens, the association said.

The association pointed out that investment in construction was currently regulated by a dozen laws and a number of decrees and circulars. There were more than 20,000 technical standards and norms existing in all stages of a project, which were pushing up costs for compliance and causing loss of opportunities to businesses.

The Vietnam Chamber of Commerce and Industry recently also revealed overlaps and inconsistencies among the legal documents in the fields of investment, land, construction, housing, environment and real estate business.

According to the General Statistics Office, only 790 real estate firms were founded in the first two months of this year, a drop by six percent over the same period last year, reflecting that the real estate market was struggling.

According to statistics from the Business Registration Department, the number of real estate firms temporarily halting operation or dissolved reached a record of 589 and 686 in 2019, up by 36.8 percent and 39.4 percent, respectively.

The Vietnam Real Estate Association also saw considerable declines in both supply and transactions. More than 107,000 products were released into the market in 2019, equivalent to only 61.5 percent of 2018 with 72,000 transactions, equivalent to just 64.7 percent./.