Hanoi (VNA) – Vietnam is enjoying strong growth in both rice export volume and value, and more export chances are still ahead as some free trade agreements (FTAs) have come into force and consumers around the globe are boosting purchase to ensure food security amid the COVID-19 outbreak. 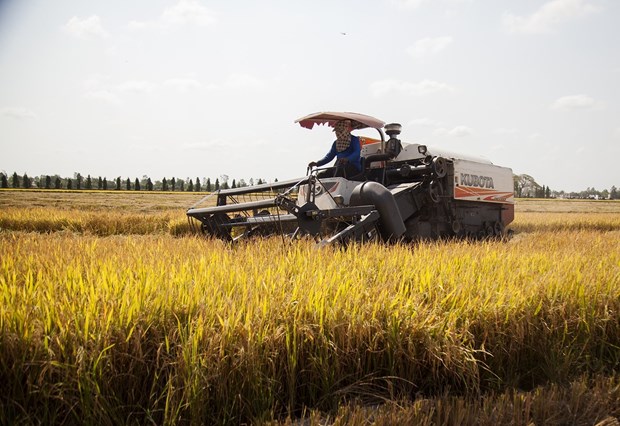 In the first two months of 2020, about 900,000 tonnes of rice worth 410 million USD were shipped abroad, up 27 percent in volume and 32 percent in value year on year, according to the Ministry of Agriculture and Rural Development (MARD).

Export prices averaged 478 USD per tonne in January, rising 7 percent from the same period last year. The Philippines was the biggest importer, accounting for 31 percent of total rice shipments. Meanwhile, Mozambique and Angola were among the markets with biggest growth rates.

Phan Xuan Que, General Director of the Vietnam Northern Food Corporation (VINAFOOD 1), said after the Lunar New Year holiday in late January, the rice market has been very vibrant. Prices set for both export and domestic sale surged by 30 – 50 USD per tonne, depending on varieties and quality.

He noted rice prices are usually adjusted on the quarterly or yearly basis, but they have been changed week by week in the first months of this year, which is a very rare situation, especially when the Mekong Delta – the country’s largest agricultural production hub – is currently in the harvest period of the winter-spring crop.

These positive signs show Vietnam is likely to achieve the rice export target of 6.7 million tonnes worth over 3 billion USD this year, according to him.

Explaining the reason for good prices in all segments, Que said as countries opened their markets for rice imports early, businesses have inked big contracts and stepped up purchase of inputs. Besides, China, which previously dominated the African market with about 3 million tonnes of rice annually, has been affected by the COVID-19 outbreak, creating a chance for Vietnamese rice in this market.

Strong demand from the Philippines and Malaysia has also helped raise prices of Vietnamese rice, thus helping the grain to narrow the price gap with the Thai counterpart and surpass the Myanmar and Indian rivals.

The MARD’s Agro Processing and Market Development Authority said demand for Thai rice stays flat as drought in this country has driven concerns about supply sources.

Export prices of Vietnamese rice are likely to rise further since they are still much lower than those of other producers’ rice, the authority noted, adding that global consumers are boosting purchase while China doesn’t increase its shipments in order to ensure food security to cope with the COVID-19 epidemic.

Que attributed the rosy export signs partly to the agricultural restructuring, which in turn has helped restructure export markets to reduce dependence on certain markets. Moreover, the competitiveness of Vietnamese rice, including that of components in the rice value chain from production, supply, processing and transportation, has been improved.

However, he said the agricultural sectors as well as businesses should continue to keep a close watch on changes in the market to concurrently attain food security and export targets.

According to the MARD, the COVID-19 outbreak has little impact on Vietnam’s rice sector, and there are likely more opportunities for export to East Africa. Besides, companies should also gear up to capitalise on advantages generated the FTA between the EU and Vietnam when this deal takes effect./.