Hanoi (VNS/VNA) – Up to 50 percent of Vietnam’s logistics firms estimate they will see revenue cut in half this year compared to 2019 because of the COVID-19 pandemic. 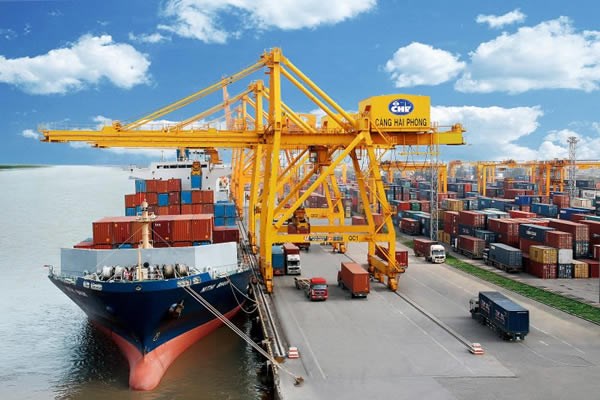 Loading goods at Hai Phong Port in the north of Vietnam. The port is estimated to lose 10-15 percent of throughput in the first two months because of COVID-19 (Photo: congluan.vn)

The latest survey conducted by the Vietnam Logistics Business Association (VLA) in early March also found that more than 50 percent of firms thought they would lose from 10-30 percent from their last year’s results due to the pandemic.

According to VLA, freight activities have been affected by the decline in rotation and goods suspended by factories in China. Since the outbreak, manufacturing activities in China have been stagnant, leading to low output of exports. As a result, many international shipping lines have had to abandon their activities at Chinese ports due to low cargo volume.

According to data from the General Department of Customs, the import value from China decreased by 7 percent in the first two months of 2020.

That led a sharp decline in value for items that Vietnam imported from China, including fabric, fiber, yarn, iron and steel in the first two months this year. Meanwhile, items commonly transported by air, such as phones, computers, and machinery, have lower levels of decline, said VLA.

“As most of the imported materials are to serve manufacturing for export, the prolonged pandemic will affect local exports and indirectly the logistics demand,” the report stated.

A representative of VLA said as Vietnam’s fleet mainly operated on short routes in Southeast Asia and Northeast Asia, in which the output and turnover of the Chinese market accounted for a major proportion, logistics firms’ result fell badly in the first quarter.

He continued: “Similar to sea transport, many Vietnamese ports also have a relatively high degree of dependence on imports and exports related to the Chinese and Hong Kong markets as they are among the largest hubs in the world.”

According to Rong Viet Securities Company (VDSC), 40-45 percent of the total number of international ships arriving at the northern port of Hai Phong were from Hong Kong and Chinese ports. In the pandemic, they skipped the two destinations and as a result skipped Hai Phong Port.

VDSC estimated container throughput of the northern port could be reduced by 10-15 percent in the first two months.

For logistics firms working in the cold storage industry, it asked for a preferential electricity price, which was currently 25 and 30 percent higher than the electricity prices for other production while asking for incentives such as tax reductions, no late payment penalties for related partners of restaurants, hotels and food supply chains, which were also influenced.

More importantly, VLA thought: “Vietnam’s logistics now largely depends on China.” So, it hoped the Government would boost local logistics as well as expand the connectivity with other countries in ASEAN such as Thailand to compensate for the shortage from China during the epidemic.

According to VLA, there were 3,000 logistics firms including ones with less than 50 workers and more than 1,000 workers each in Vietnam./.