Hanoi (VNS/VNA) – Vietnam is in need of major investors in fruit and vegetable production in order to boost processing, especially in the packaging and post-processing stages, to preserve products for longer and enhance their value. 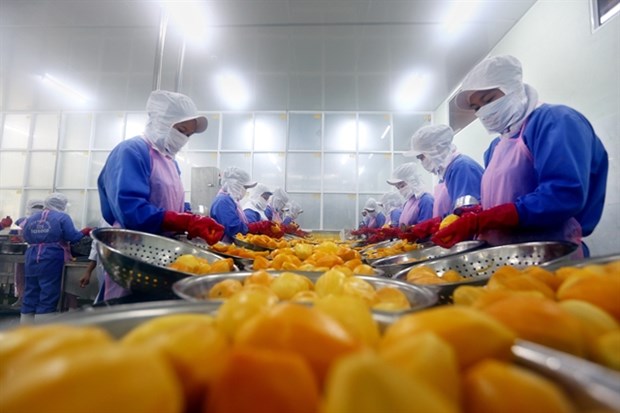 A mango processing line at Nafood Group in the southern province of Long An (Photo: VNA)

The information was released by General Secretary of the Vietnam Association of Vegetables Dang Phuc Nguyen, who said that at the same time businesses needed to gradually improve their techniques to meet the needs of various markets.

Statistics from the Ministry of Agriculture and Rural Development (MARD) showed that the value of fruit and vegetables exported in the first two months of this year was estimated at 513 million USD, down 11.9 percent year-on-year.

In February, the domestic market saw prices fall for various vegetables, especially those from Da Lat, which is the country’s vegetable hub, in the southern province of Lam Dong.

“Vietnam’s products have been held up since China, which is one of the large importers of Vietnamese products, stopped buying,” Nguyen said.

Insiders said the reason for the decline in prices was that farmers in other areas had adopted similar growing techniques to Da Lat, leading to a surplus. In addition, due to the impacts of the COVID-19 pandemic, exports of these vegetables to the Chinese and Cambodian markets had encountered many difficulties, leading traders to turn their backs on local goods.

For some including dragon fruit, jackfruit and durian, prices plummeted by five-six times early last month due to customs clearance difficulties at the China border. Prices have started to rebound thanks to a partial re-opening of the border and support from businesses to boost domestic consumption.

Insiders said the fruit and vegetable industry was still too dependent on traditional markets such as China, which caused difficulties for enterprises and gardeners whenever the country changed its import policies.

This showed the need to restructure the domestic market and diversify markets, especially Africa, the Netherlands, US and Japan to avoid risks due to over dependence on a limited number of markets.

Statistics from the Vietnam Association of Vegetables revealed that exports of fruit and vegetables to the US, Thailand and Africa had shown positive signs in 2019.

In the US market, for the first time, Vietnam’s mangoes met the standards needed to be exported, opening opportunities for the country to export its other fruit to the US.

In Africa, import demand is increasing and quality standards are not as high. For Thailand, last year Vietnam exported 74.94 million USD  of fruit and vegetables, up sharply by 66.3 percent year-on-year.

Nguyen said the EU Parliament officially voted to ratify the Europe-Vietnam Free Trade Agreement (EVFTA) and the Investment Protection Agreement (IPA) on February 12, 2020. “This is an opportunity for businesses to expand their export markets for fruit and vegetables because they will no longer face import tax after the agreement takes effect.”

He added that Vietnam had many opportunities to boost exports to European and Asian markets. The EVFTA and IPA agreements would create favourable conditions for fruit and vegetable businesses to expand their export markets and participate in global value chains, including Asian and European markets, he added.

The problem for Vietnam’s fruit and vegetable industry is quality and competitiveness. Less than 20 percent of plantations nationwide are concentrated, while cultivation and disease management processes have not been applied comprehensively. This makes it difficult to control the supply, food hygiene and traceability.

“It makes negotiations for recognition of quality management and food safety management with partners difficult. That’s why many countries turn their backs on Vietnamese fruit and vegetables,” Nguyen said./.