Hanoi (VNS/VNA) – An art exhibition at the Vietnam Tuong Theatre in Hanoi offers art lovers and tourists a chance to learn about the art of tuong, or classical drama. 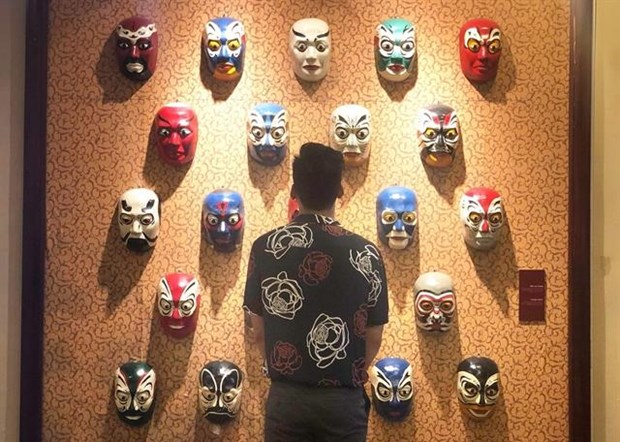 Titled “Behind the Mask”, the exhibition also aims to raise local people’s awareness of and introduce foreign tourists to this unique traditional art form, a Vietnamese cultural gem that is gradually losing popularity in modern society.

Though the facial make-up may be the most characteristic and outstanding feature of tuong, it is not everything. Behind the Mask invites audiences to look beyond the colours and strokes to find other distinctive aspects of this long-established performing art.

With a history of around 800 years, tuong has steadily developed and enhanced its various aspects from make-up and costume to music.

The Vietnam Tuong Theatre has been making significant contributions to preserving and developing this traditional art form. With the aim of offering visitors the chance to learn about this art form, the exhibition is divided into four sections.

The ‘History Room’ on the ground floor provides a brief introduction to the long history of tuong.

The theatre has also won several awards at national drama festivals including gold medals at the 2019 National Festival of Tuong and Folk Songs and 2012 Festival of Vietnamese Nationalities’ Traditional Music Instruments, and the A Prize at the 1996 Theatre Awards from the Vietnam Association of Theatre Artists.

Right opposite the ‘History Room’ is a set of four collages by tuong painter Nguyen Hoang Phong.

Using traditional materials like do (poonah) paper and bamboo blinds and shades, the collages depict patterns inspired by tuồng masks as well as geometric motifs from the bronze drums of the Bronze Age Dong Son Culture in ancient Vietnam.

On the way to the upper floor, where the exhibition continues, visitors can see black-and-white photos depicting scenes from famous tuong plays performed by artists from the Vietnam Tuong Theatre.

The upper floor has a display of performing costumes and musical instruments.

Costumes from the folk play Ngheu So Oc Hen and the classical play Nu Tuong Dao Tam Xuan are placed opposite each other, allowing the audience to compare the differences between the two main genres of tuong.

Also on this floor is a large altar to tuong ancestors where, before every performance, artists offer incense sticks to pray for a successful show.

Behind the Mask, the first permanent exhibition of its kind, is part of a series of activities celebrating the Vietnam Tuong Theatre‘s 60th anniversary.

The exhibition at 51A Duong Thanh Street, Hoan Kiem district, is open from 9am to 6pm every day, and entry is free. Free tours with guides are also available./.