Hanoi (VNA) – The 4th International Experimental Theatre Festival is underway in Hanoi, with foreign and domestic troupes staging a series of enticing plays. 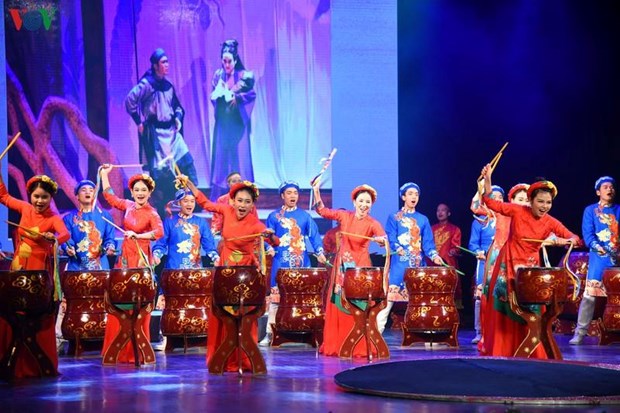 At the opening ceremony (Photo: VOV)

Opening on October 4, the 10-day show introduces 21 plays brought about by 14 troupes from host Vietnam, while seven others from Hungary, Israel, India, the Republic of Korea, China, Singapore, and Greece bring to the show seven plays.

According to the organising board, the number of participants and plays this year increases significantly compared to previous events.

Speaking at the opening ceremony at the Hanoi Opera House, Deputy Minister of Culture, Sports and Tourism Ta Quang Dong said the event is an important activity, creating an opportunity for Vietnamese theatre artists to exchange experience and learn from their foreign peers.

Co-organised by the Vietnam Stage Artists Association and the Ministry of Culture, Sports and Tourism’s Performing Arts Department, the first, second, and third editions of the festival took place in Vietnam in 2002, 2006 and 2016, respectively.

At the last edition, 16 plays were staged by eight troupes from China, the Philippines, Japan, Greece, Germany, Panama, France, and Vietnam. Three plays from Vietnam, Japan and China won the gold medals./.