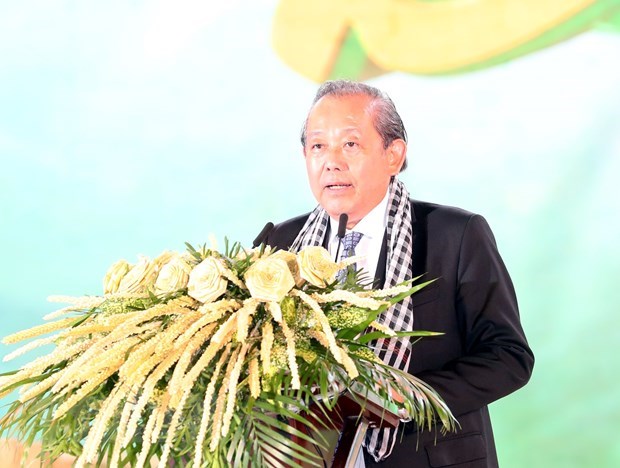 Permanent Deputy Prime Minister Truong Hoa Binh speaks at the event (Photo: VNA)
Speaking at the opening ceremony, Vice Secretary of the provincial Party Committee and Chairman of the provincial People’s Committee Cao Van Trong said it is the first time the festival has been held in concurrent with the great national unity festival in wards and communes.

Ben Tre is now home to over 72,000ha of coconut, accounting for half of the country’s and 80 percent of the Mekong Delta’s total areas. With over 800 million nuts each year, the province earns over 200 million USD from export and its coconut products are available in more than 50 countries and territories at present, he said.

In his speech, Permanent Deputy Prime Minister Truong Hoa Binh lauded Ben Tre as a “national coconut orchard” and the “capital of coconut” of the country.

According to him, coconut is a strategic industrial-agricultural item that makes important contributions to the local socio-economic development and the national target programme for new rural development.

He requested more attention to scientific research to improve varieties, providing incentives to boost coconut growing and its products, promoting trade to increase export revenue by 10 folds in the next 5-10 years, and popularising Ben Tre’s images to attract 2 million visitors next year, including 900,000 foreigners.

The festival will last till November 20 with various activities such as the southern coconut cuisine festival, an exhibition on coconut products and trade fair, a seminar on building, tapping and developing local special brands.

A highlight of the event will be the “ao ba ba” (traditional costume of southern people) festival, street arts, tours of ecological sites and coconut orchards, and a festival introducing food cooked from coconuts./.