Hanoi (VNA) – The Vietnam National Village for Ethnic Culture and Tourism is hosting myriad activities from December 1 to January 2, 2020 to greet New Year 2020. 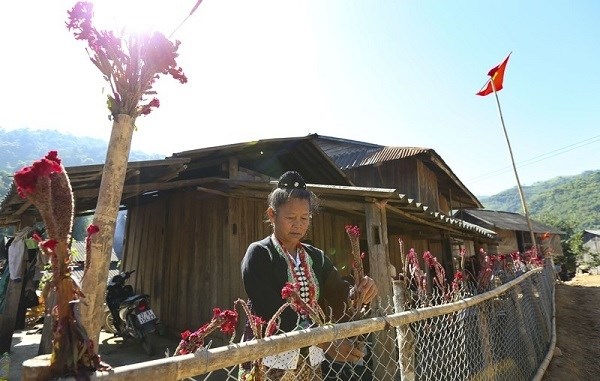 A Cong woman decorating her fence with flowers to prepare for traditional ‘Tet Hoa’ festival (Photo: vov)
The highlight of the event is a rural market showcasing cultural identities, traditional practices and handicrafts, and indigenous dishes of ethnic groups in the northern region, including Mong, Cong, Thai, Tay, Dao, and Kho Mu people.

Visitors to the market can explore the craft of bamboo and rattan weaving, and dyeing techniques of Mong and Cong ethnic women in Dien Bien province.

Meanwhile, Mong people will reveal their techniques of beeswax painting on fabric – a traditional craft which has been practiced in their community for generations.

For its first time participating in the village, Cong ethnic people from Dien Bien province will reproduce their traditional ‘Tet Hoa’ festival, which is observed after the harvesting season. It is an occasion for locals to pay gratitude to the ancestors, honour traditional cultural values and pray for a New Year full of peace, prosperity and luck.

The month-long programme also includes a wide range of folk music performances, folk dances, and various folk games, such as tug of war and Con (a ball made from colourful fabric pieces) throwing./.