HCM City (VNA) – A Vietnam-Japan cultural exchange festival kicked off in Ho Chi Minh City on December 29 with the participation of thousands of visitors. 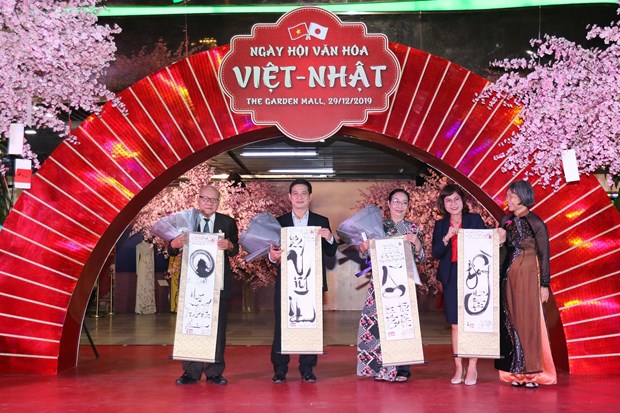 The Vietnamese side introduces calligraphy painting to visitors (Photo: VNA)

On show were a Japanese tea ceremony, Haiku poetry, origami, and martial arts, while the Vietnamese side put on an “ao dai” fashion show, calligraphy painting and “chau van” (spiritual singing).

Chairman of the Vietnam-Japan Friendship Association in HCM City Nguyen Cong Tanh said the regular organisation and diversification of such activities helps promote the friendship between the two nations and particularly between HCM City and Japanese cities and prefectures.

He added that his association and local authorities have jointly held a number of exchange activities in various fields such as culture, education and charity work.

As a member of the Ho Chi Minh City Union of Friendship Organisations, the association has called upon businesses in Vietnam and Japan to promote bilateral trade and economic cooperation, he said.

In 2019, Japan has become the third biggest trade market of Vietnam. A number of technical and education exchanges between the two sides have taken place in HCM City.

Japanese Consul General in HCM City Kawaue Junichi voiced his hope that the city will continue to hold the festival to forge connections between Vietnamese and Japanese people as well as contribute to the development of the two countries’ relations./.