Lai Chau (VNA) – A ceremony was held in Muong Te district, the northwestern mountainous province of Lai Chau, on December 31 to wrap up the sixth Vietnam-Laos-China ‘con’ festival, themed “Colour of friendship”. 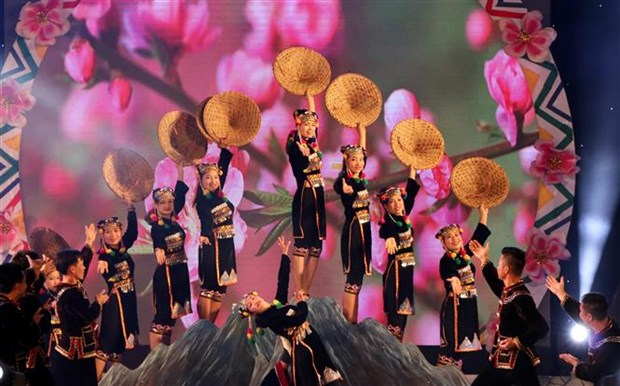 A performance at the closing ceremony (Photo: VNA)
Chairman of the Muong Te district People’s Committee Mai Van Thach affirmed the three-day biennial festival among border districts of the three countries was a success and a political and cultural event of great significance that helps intensify the exchanges and cooperation among the localities.

It also contributed to promoting the cultural identities of ethnic minority groups in Lai Chau in general and Muong Te district in particular to international friends, he said.

Representatives of foreign localities expressed their satisfaction at the preparations and hospitality by the hosts, and hoped the event will make important contributions to the boosting of trade and cooperation among them.

The event welcomed over 700 participants from Lai Chau and Dien Bien provinces in Vietnam, Phongsaly province in Laos and Yunnan province in China.

The ‘con’ is a small ball made from pieces of colourful cloth stuffed with puffed rice and cotton seeds. It is thrown at a bamboo hoop as part of a folk game played during the festivals and New Year holidays of Thai ethnic communities.

The next ‘con’ festival among the three countries will be held in Yunnan province of China in 2021./.