Ox racing festival in An Giang gears towards international status

An Giang (VNA) – The Bay Nui Ox Racing Festival in the Mekong Delta province of An Giang is expected to become an international event under a project recently approved by the provincial People’s Committee. 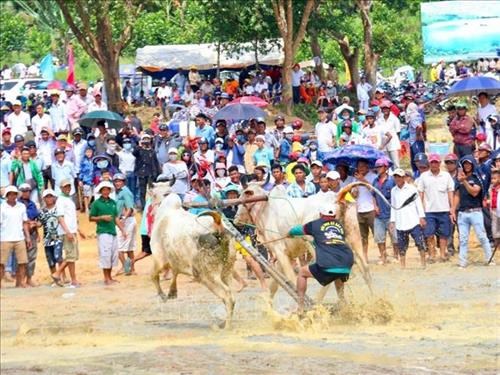 The project on the conservation of the Bay Nui Ox Racing Festival has a total funding of nearly 5.8 billion VND (251,822 USD), of which 2.9 billion VND comes from the provincial budget and nearly 1.2 billion VND is contributed by Tinh Bien and Tri Ton districts, Le Van Phuoc, Vice Chairman of the provincial People’s Committee said on March 2.

An Giang will develop tours connecting cultural and historical relic sites, and tourism destinations across the province with venues of the festival in Tri Ton and Tinh Bien districts.

The festival is projected to be rolled out in the Mekong Delta region and upgraded to an international event with the participation of Khmer people from Cambodia and other Southeast Asian nations.

Nguyen Khanh Hiep, Director of the provincial Department of Culture, Sport and Tourism, expressed his hope that the project will help to preserve ox breeds, improve ox caring and taming methods, and upgrade infrastructure in service of the festival.

The festival is part of the Sene Dolta, one of the most important annual festivals of the Khmer community in the southwest region, along with Chol Chnam Thmay (New Year) and Ooc Oom Bok, a festival honouring the moon for a good harvest.

The oxen racing festival commemorates the merits of the Khmer’s ancestors and wishes for happiness and peace for their souls.

During the event, held from the 29th day of the eighth lunar month until the first day of the ninth lunar month each year, Khmer people pay tribute to their ancestors and take part in activities with traditional songs and dances after a year of hard work./.