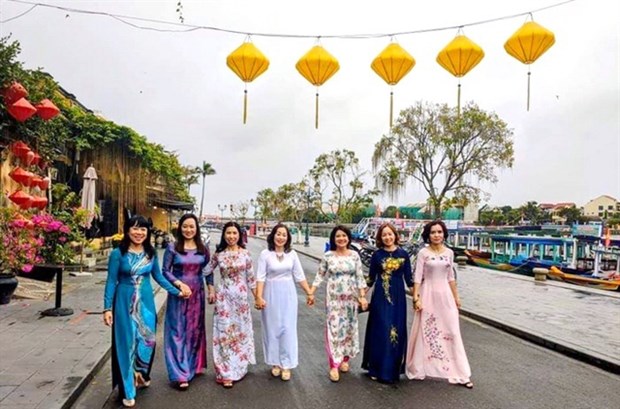 Illustrative image (Photo: phunuvietnam.vn)
The event, co-launched by the Vietnam Women’s Union Central Committee and the Ministry of Culture, Sports and Tourism, aims to celebrate the 90th anniversary of the union’s establishment and 110th anniversary of International Women’s Day (March 8).

This is an activity to honour the beauty and value of Ao dai in social life, raise awareness and people’s pride and responsibility in preserving and promoting the precious traditional costumes regarded as a national cultural heritage, according to the organisers.

Women’s unions in localities, particularly those members who are officials, civil servants and businesswomen, are encouraged to wear Ao dai throughout the week.

Many cultural activities related to Ao dai are being held, such as a photo contest on Facebook, beauty contests and fashion shows.

Experts said that in the country’s cultural and art history, Ao dai is not only a great work of art adding to the national beauty but also a symbol of the identity and spirit of Vietnam.

The traditional dress is suitable for all ages. It has become the standard costume on formal occasions or national holidays, weddings, New Year festival, graduation day or in important competitions.

Ao dai has also made a great contribution to promoting the image of Vietnamese women around the world./.