Vietnamese photographers up for prestigious award 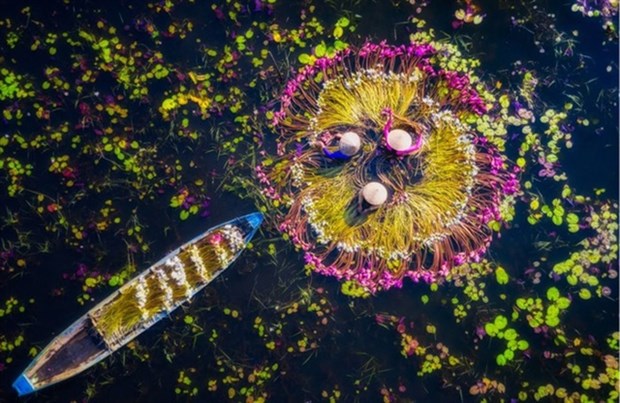 “Harvesting Water Lilies” by Nguyen Tan Tuan (Photo courtesy of the photographer)
Tuan and Thien are among 60 finalists in the contest’s six categories of Natural World, People, Travel, The American Experience, Altered Image and Mobile.

Tuan’s photo entitled Harvesting Water Lilies in the Travel category was taken in Moc Hoa, the southern province of Long An. The water lilies were washed before being sold at the market.

Another photo by Tuan, Follow The Herd in the Altered Image category, depicts buffalo following each other to new food sources at Dau Tieng Lake, in the southern province of Binh Duong.

“Aerial Fisherman” by Nguyen Thien (Photo courtesy of the photographer)

Thien’s photo entitled Aerial Fisherman is competing in the Travel category. He took the picture of a fishing net moving underneath the water’s surface along the coast of the central province of Phu Yen.

Entitled A Fish Seller Displays His Goods features a man posing with his scooter in Hanoi with a delivery of pet fish.

The riders have an amazing ability to transport all kinds of goods in astonishing quantities. The photographer spent a week chasing down riders and their cargos and convincing them to pose for the camera, according to the contest website.

The 60 finalists were selected from 36,000 photos from 145 countries and territories.

People can vote at https://www.smithsonianmag.com/photocontest/archive/2019/ before March 31./.
en.vietnamplus.vn