Retail sales up 11.5 percent in January-August 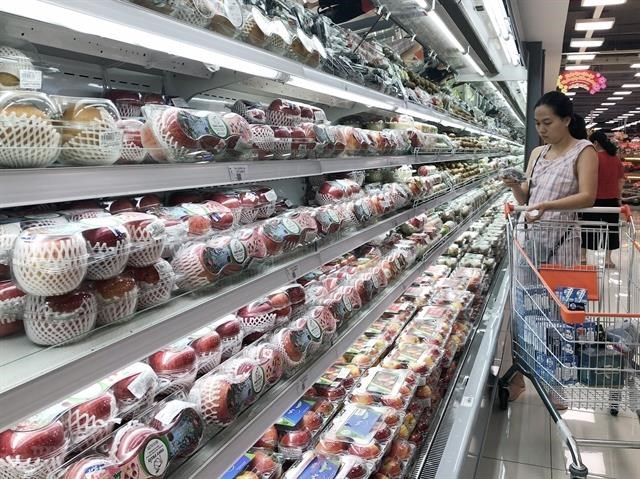 A woman shops for fruits at a supermarket in HCM City (Photo: VNA)

This positive growth proved the rising demand of local people, GSO statisticians have said, adding that if the price factor was excluded, purchasing power in the first seven months increased by 9.03 percent, higher than the 8.9 percent recorded in the same period of last year.

Retail sales of goods during the period were estimated at 2.44 quadrillion VND (104.9 billion USD), surging 12.5 percent year on year or accounting for 76 percent of the total revenue.

Among all sectors, purchases of educational and cultural products grew by 14 percent year on year, followed by food and foodstuff (13.6 percent), home appliances (11 percent) and textiles and apparel (10.5 percent) and transportation (8.5 percent).

According to GSO, revenue from accommodation and catering services rose 10 percent year-on-year to nearly 386 trillion VND (16.56 billion USD), making up 12 percent of the total revenue.

Revenues of other services were estimated at 355 trillion VND (15.27 billion USD), 7 percent higher than the same period last year.

According to the Vietnam Institute for Trade Research, the goods retail market is seeing an increase at mini marts and convenience stores.

The institute forecast that convenience stores would see double-digit growth in the next three years and reach 37.4 percent growth in 2021.

Under the domestic trade development strategy, total sales of goods and services would grow by 13 percent each year through 2020 and by 14 percent per year in the 2021-25 period.