Hanoi (VNA) – The National Assembly Standing Committee opined on several issues related to the revised Law on Securities at its ongoing 36th session on August 12. 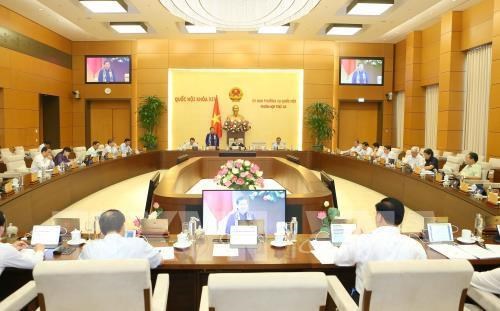 At the event (Photo: VNA)

At the event, Chairman of the NA’s Committee for Economic Affairs Vu Hong Thanh delivered a report on the draft law.

He said based on deputies’ opinions gathered at the 7th NA sitting, the committee has worked with agencies to reach an agreement on some amendments to the listing of securities, ownership rate of foreign investors and foreign-funded economic organisations, and registration for secured transactions of the Vietnam Securities Depositories, among other issues.

Regarding a debate on the State Securities Commission (SSC)’s legal status, tasks and jurisdiction, NA Chairwoman Nguyen Thi Kim Ngan agreed that the SSC should be directly under the Ministry of Finance.

Agreeing with that, NA Vice Chairman Phung Quoc Hien said the decision will help stabilise the financial market, adding that the SSC’s increased jurisdiction ought to be in line with the current law and the Communist Party of Vietnam’s regulations.

He suggested keeping the relationship between the ministry and the commission unchanged.-VNA