Hanoi (VNA) – Hanoi expects to overfulfil seven out of 22 targets set for this year, Vice Chairman of the city People’s Committee Nguyen The Hung reported to the municipal People’s Council on December 3. 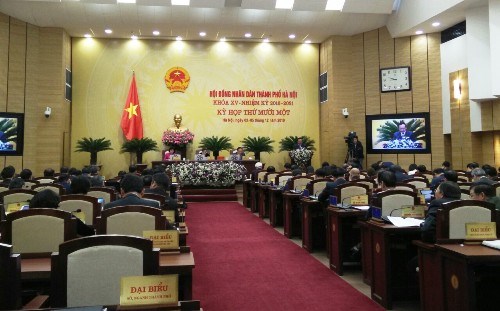 At the 11th session of the 15th-tenure People’s Council of Hanoi (Source: thoibaotaichinhvietnam.vn)

In a report delivered at the 11th session of the 15th-tenure People’s Council, the Vice Chairman said the capital would surpass the targets in per capita GRDP, social investment, exports, voluntary social insurance, poverty reduction, urban unemployment and clean water supply for rural areas.

The report said the city’s Gross Regional Domestic Product (GRDP) expands by an estimated 7.46 percent in 2019, the highest growth in four years. The business and investment environment continued to be imported, with the city attracting 8.05 billion USD of foreign direct investment, leading the country in terms of FDI attraction.

Besides the achievements, the report pointed out outstanding problems and shortcomings, including a 33 percent reduction in the pig herd due to the African swine fever, slow disbursement of investment in capital construction, and the slow land clearance for some major projects which affect the projects’ pace and investment effectiveness.

Next year, Hanoi will strive for a GRDP growth of at least 7.5 percent, per capita GRDP of 136 million VND, a minimum increase of 8 percent in exports, and an urban unemployment rate of under 4 percent./.