Deputy Prime Minister Truong Hoa Binh stressed the need for all countries to make joint efforts in the fight against drug crime while receiving heads of delegations attending a ministerial meeting in Hanoi on September 10. 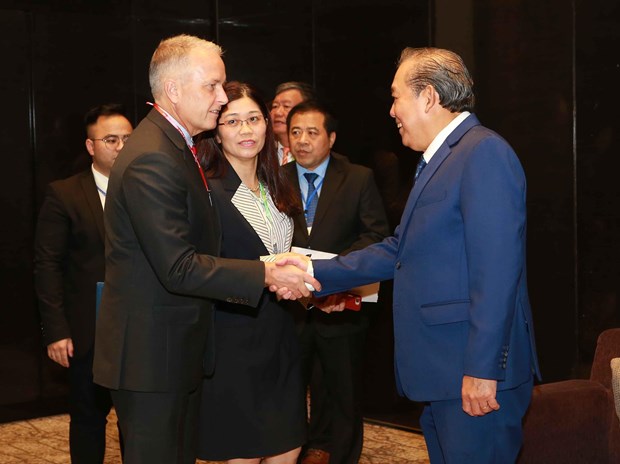 Hanoi (VNA) – Deputy Prime Minister Truong Hoa Binh stressed the need for all countries to make joint efforts in the fight against drug crime while receiving heads of delegations attending a ministerial meeting in Hanoi on September 10.

The ministerial meeting on enhancing the effectiveness of cooperation in fighting transnational drug crime was held in Hanoi the same day at the initiative of the Vietnamese Ministry of Public Security. It attracted nearly 200 delegates from Cambodia, Laos, China, Thailand, Myanmar, the Philippines, Vietnam, the US’ Drug Enforcement Administration (DEA), the Australian Federal Police (AFP), and the Regional Office of Southeast Asia and the Pacific of the UN Office on Drugs and Crime (UNODC).

At the reception, Binh said drug production and trafficking remain complex and are growing at an alarming rate around the world. Drug crime has negatively affected the lives of communities and the development of all nations.

Facing that fact, regional countries have carried out a number of cooperation activities to control the drug situation, and they have obtained encouraging outcomes, the Deputy PM noted.

He emphasised that together with other countries, the Vietnamese Government has always made efforts to implement comprehensive and balanced measures in drug prevention and control, with attention paid to reducing both drug supply and demand.

In 2019, Vietnam’s anti-drug forces have coordinated closely with foreign peers to seized several tonnes of drugs, most of which were destined for other countries.

Binh noted Vietnam and other ASEAN countries have pledged to eradicate the scourge of drugs for the sake of a drug-free ASEAN. To realise that commitment, they have implemented many cooperation initiatives effectively such as the ASEAN ministers and senior officials’ meetings on drug matters, the ASEAN centre for drug crime information, the ASEAN working group on fighting drug trafficking by air and sea, and the ASEAN plan on drug control in the Golden Triangle area.

The Deputy PM highlighted that drug crime is a global issue that no single country can resolve on its own, but all countries need to join hands in the combat.

Vietnam highly values the DEA, AFP and UNODC’s support for the countries to carry out cooperation activities in the work in the region, he said, calling for all nations and international organisations to pay more attention to and continue supporting the fight against drugs.

Through the ministerial meeting, the Vietnamese Government wants to affirm its continued enhancement of cooperation with regional and partner countries and international organisations in the fight against drugs, thereby joining the international community’s efforts to address this global issue, Binh added.-VNA