Hanoi (VNA) – The chiefs of the general staffs of the Vietnam People’s Army (VPA) and the Cuban Ministry of the Revolutionary Armed Forces (MINFAR) highlighted the fruitful defence cooperation between the two countries and agreed to enhance the partnership during talks in Hanoi on September 16. 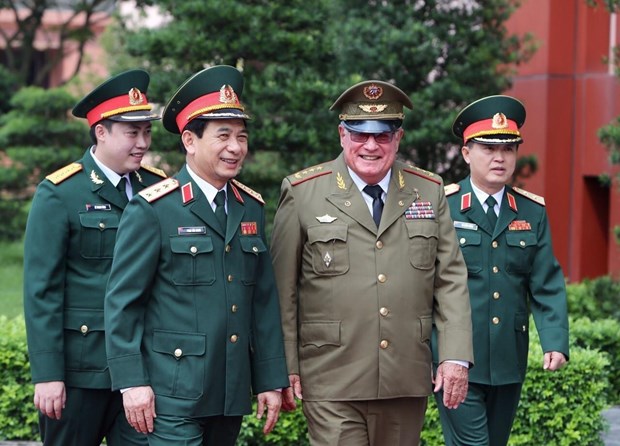 The talks held following the welcome ceremony for the Cuban side were chaired by Sen. Lt. Gen. Phan Van Giang, member of the Party Central Committee, member of the Central Military Commission’s standing board, Chief of the VPA’s General Staff and Deputy Minister of National Defence, and Sen. Lt. Gen. Alvaro Lopez Miera, Politburo member, Chief of the General Staff and First Deputy Minister of the MINFAR.

Both sides voiced their delight at the growth of the two countries’ relations, including in defence – one of the pillars of the bilateral ties.

They noted the countries have effectively implemented cooperation activities on the basis of the signed documents and agreements under the cooperation plan for 2017 – 2019. High-ranking exchanges have also been further increased, helping to promote the defence partnership in a result-oriented manner.

As Vietnam and Cuba are preparing to mark the 60th founding anniversary of their bilateral diplomatic relationship next year, the officials agreed to compile a dossier on the 60-year history of the defence relationship so as to help educate younger generations about the special traditional friendship between the two nations.

For the time ahead, the two sides will further promote the effectiveness of existing cooperation mechanisms and maintain all-level mutual visits. The officials also expressed their willingness to welcome each other’s delegations on the trips for the celebrations of the diplomatic relationship’s 60th anniversary in 2020.

Regarding collaboration in the defence industry, both sides agreed to work closely with each other in the implementation of joint projects.

Sen. Lt. Gen. Giang said the Vietnamese Ministry of National Defence is ready to cooperate with Cuba in such fields as telecommunications and communications for which Vietnam has mastered technologies. He also asked the MINFAR to facililtate the Vietnamese military-run industry and telecom group Viettel to invest in telecom infrastructure and other potential areas in Cuba.

Besides, Vietnam will continue sending personnel to training courses in the fields the Caribbean nation is strong at like military medicine and engineering. It is also ready to receive Cuban personnel for training in cryptography, defence industry, electronic warfare and Vietnamese language, he added.

After the talks, the Cuban delegation paid a courtesy call to Gen. Ngo Xuan Lich, Politburo member, Vice Secretary of the Central Military Commission and Minister of National Defence of Vietnam. They also had a meeting with Gen. Luong Cuong, Secretary of the Party Central Committee, member of the Central Military Commission’s standing board, and head of the VPA’s General Department of Politics.

The Cuban guests were on an official visit to the Southeast Asian country from September 14 to 16./.