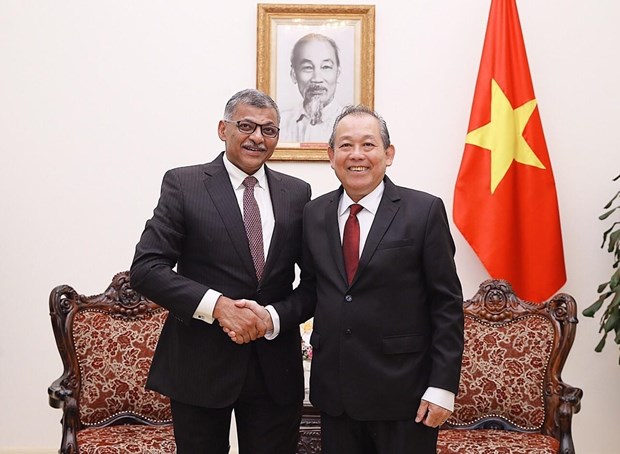 Deputy PM Binh highlighted that the two countries have recorded substantive developments in their strategic partnership over the past years.

He also expressed his delight at the growing cooperation between the two supreme courts, stressing the importance of further collaboration and experience sharing between courts of the two countries, as the judicial and legal systems of Vietnam are making intensive and extensive reforms.

He spoke highly of the Singaporean Supreme Court’s experiences, considering them valuable to Vietnam’s legal and judicial reforms.

Regarding the East Sea issue, the Deputy PM said Vietnam is extremely concerned about China’s recent actions in the sea. These have violated not only Vietnam’s waters but also the Declaration on the Conduct of Parties in the East Sea, and run counter to China and the ASEAN countries’ commitment to maintaining a favourable environment for the negotiation on a Code of Conduct in the waters, Binh stressed.

According to him, the ASEAN members need to ensure their central role by coordinating their stances, sustaining the bloc’s solidarity, having common voices and resolutely objecting unilateral actions that infringe international law, seriously violate coastal nations’ rights and legal and legitimate interests, or negatively affect the maintenance of peace, stability, security and safety of navigation and aviation in the East Sea.

For his part, Chief Justice Menon said the Singapore-Vietnam strategic partnership has been illustrated in mutual high-ranking visits and various cooperation aspects, including justice.

He noted that during his delegation’s visit, the two countries’ court sectors will sign a memorandum of understanding on information exchange so as to help share experience at a higher level.

As for the East Sea issue, the official said his country always trusts the relevant sides’ respect for law and settlement of disputes by negotiations./.