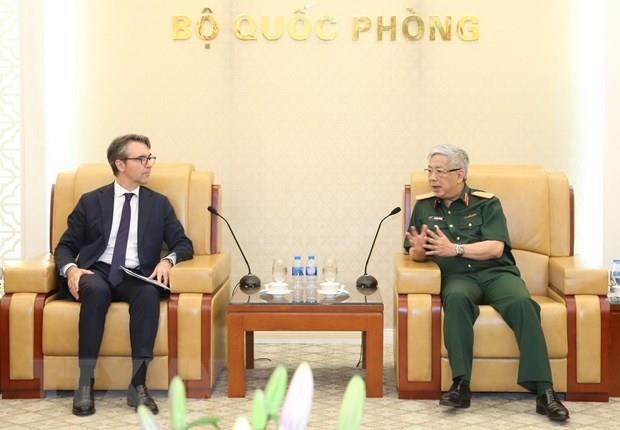 Deputy Minister Vinh affirmed that Vietnam treasures its relationship with the EU, including defence ties, adding that the Vietnamese Defence Ministry wants to work closely with the EU Delegation in Vietnam to further promote defence ties between the two sides.

Vinh welcomed the visit by the Chairman of the EU Military Committee next year, and expressed his wish that EU will support Vietnam during the year Vietnam serves as Chair of the Association of Southeast Asian Nations (ASEAN) in 2020.

The head of EU Delegation to Vietnam noted the positive development of the EU-Vietnam relationship, including in the field of defence. He said the EU hopes Vietnam will continue backing the EU’s engagement in defence-security structures in Asia-Pacific, including the ASEAN Defence Ministers’ Meeting Plus (ADMM ).

The same day, Deputy Minister Vinh received the out-going and new Defence and Military Attachés, Naval Attachés and Air Attachés of the Thai Embassy in Vietnam.

Vinh told the guests that defence cooperation between Vietnam and Thailand has grown more effective over the recent past. He said the Vietnamese Defence Ministry appreciates the work of the Defence and Military Attaché, Naval Attaché and Air Attaché of Thailand during the past tenure.

The Deputy Defence Minister pledged to create favourable for the new attachés to fulfill their duty.

He also asked Thailand to support Vietnam when Vietnam serves as Chair of the ASEAN in 2020./.