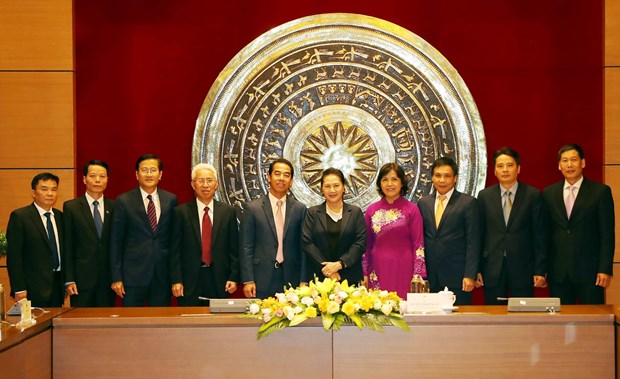 Chairwoman of the National Assembly Nguyen Thi Kim Ngan (fifth, right) and diplomats pose for a photo at the meeting in Hanoi on October 9 (Photo: VNA)

Congratulating the diplomats on their appointment, the top legislator said she believes that they will overcome all difficulties and challenges to fulfill their assigned tasks.

Chairwoman Ngan noted the diplomatic sector, including the Ministry of Foreign Affairs, has obtained numerous achievements and greatly helped to maintain a peaceful and stable environment for national development and defence and the country’s stature and prestige promotion.

There has also been stronger coordination between State and parliamentary diplomacy, she said.

The top legislator added that the NA’s external work will continue to be enhanced in the time ahead to further promote its role and stature at international and regional parliamentary forums.

Ngan asked the Foreign Ministry and the ambassadors to work closely with the External Relations Committee and other agencies of the NA to successfully organise bilateral and multilateral parliamentary diplomatic activities.

Additionally, they also need to further coordinate with the committee, the Party Central Committee’s External Relations Commission and relevant agencies to step up the Party and NA’s diplomatic links and people-to-people ties with other countries.

According to her, many heavy responsibilities are awaiting the diplomatic sector, including fostering Vietnam’s relations with other countries in a more substantive manner, especially when the country takes over the ASEAN Chairmanship in 2020 and serves as a non-permanent member of the UN Security Council for 2020-2021.

The chairwoman wished the diplomats a successful term to help strengthen Vietnam’s relations with other countries and foreign partners and raise the country’s prestige and standing in the world.

On behalf of the ambassadors and heads of representative diplomatic agencies, Ambassador to China Pham Sao Mai pledged that their agencies will make utmost efforts to fulfill the tasks assigned by the Party, State and people, including reinforcing the NA’s cooperation with foreign parliaments./.