Party official: Vietnam will do its best to foster ties with Cuba

Hanoi (VNA) – Vietnam will do its best to foster traditional friendship, comprehensive cooperation and solidarity with the Party, State and people of Cuba, said Politburo member and permanent member of the Party Central Committee’s Secretariat Tran Quoc Vuong. 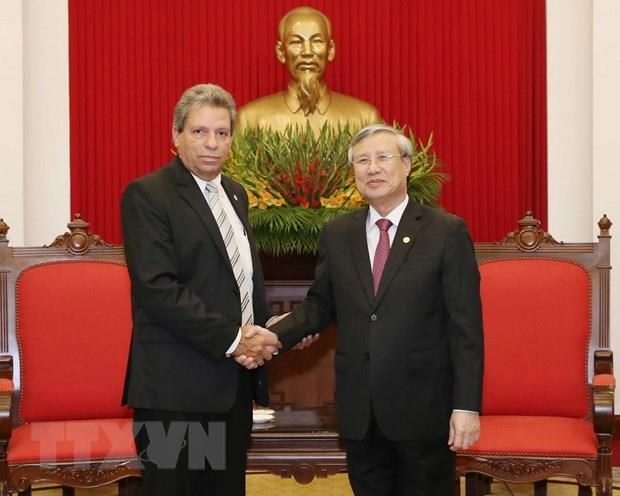 During a reception in Hanoi on October 15 for Secretary of the Communist Party of Cuba (PCC) Central Committee and head of the PCC’s Thought Commission Victor Gaute Lopez, Vuong expressed his belief that the visit will further deepen special friendship between the two Parties and countries.

He said under the sound leadership of the PCC, the fraternal Cuban people will continue reaping successes in the process of building socialism with prosperity and stability.

Vuong affirmed the Vietnamese Party, State and people’s consistent stance on supporting Cuba’s revolutionary cause, the struggle to immediately and unconditionally end the economic, trade and financial embargo against Cuba.

Victor Gaute Lopez briefed the host about situation in Cuba and difficulties caused by the embargo, affirming that the Party, State and people of Cuba will overcome challenges and defeat plots by hostile forces, thus carrying the country forward.

He affirmed that the Party, State and people of Cuba attach importance to special relationship with Vietnam, and stay determined to further deepen comprehensive cooperation between both sides.

Earlier, Politburo member and head of the Party Central Committee’s Commission for Information and Education Vo Van Thuong held talks with the Cuban official, during which both sides extensively discussed political thought work and agreed to hold celebrations for the 60th anniversary of bilateral diplomatic ties next year.

Victor Gaute Lopez also held a working session with head of the Party Central Committee’s Commission for External Relations Hoang Binh Quan and reviewed the implementation of signed cooperation agreement between the two Parties for the 2018 – 2023 period.