Hanoi (VNA) – Deputy head of the Party Central Committee’s Commission for Information and Education and Minister of Information and Communications Nguyen Manh Hung hosted a reception in Hanoi on October 15 for Vice President of China’s Xinhua News Agency Zhang Sutang. 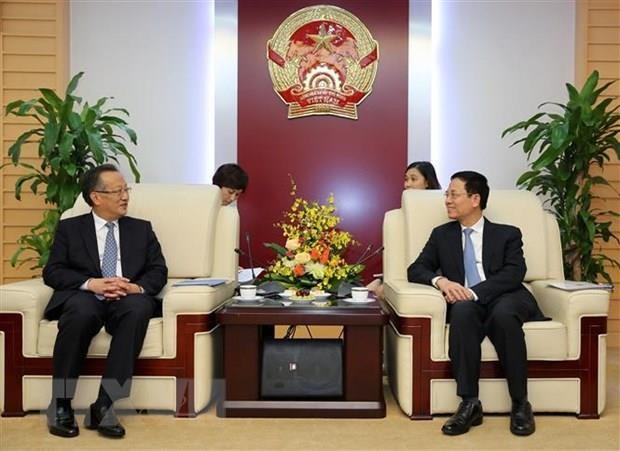 Zhang is making a working visit to Vietnam from October 14 – 18 at the invitation of the State-run Vietnam News Agency (VNA).

Minister Hung expressed his delight at the outcomes of cooperation between the VNA and Xinhua over the past years, which he said has contributed to popularizing each country’s external policies, enhancing friendship between the two Parties and mutual understanding between the Vietnamese and Chinese people.

He hailed Xinhua for its renovation efforts recently such as adopting new technologies such as big data, cloud computing, Internet-of-Things, and artificial intelligence.

Zhang briefed the host about the organisational structure and operating model of Xinhua – the national news agency of China.

He believed that Xinhua and VNA share many similarities and will continue to effectively carry out signed agreements, enhance information sharing and exchange of visits, as well as support each other’s resident reporters.

VNA General Director Nguyen Duc Loi also received the Xinhua delegation the same day, during which he expressed thanks to Xinhua for its help to VNA through providing equipment and training for reporters and editors.

The host suggested that both sides should increase information sharing and fight negative news about their respective countries’ situation, especially distorted and reactionary news that aims to divide the two nations.

As national news agencies, Xinhua and VNA should carry more positive news about the other country, thus strengthening public trust in the political system and protecting the ideological foundation and the path to socialism in each country, he said.

Zhang shared Loi’s view that the two sides should promote the sharing of information and expertise towards improving news quality and mutual understanding between the two countries’ people.

Both sides reviewed the implementation of the professional cooperation agreement signed in 2017 during a Vietnam visit by Xinhua President Cai Minzhao and commitments during the China visit in 2018 by General Director Loi.

Trang said English news by Xinhua is one of the major news sources used by VNA.

VNA receives about 5,000 – 6,000 photos from Xinhua each month, and sends about 10 photos featuring Vietnam’s political, socio-economic and cultural situation to Xinhua each day, she said, adding that VNA also uses video news with stable quality provided by Xinhua.

As Vietnam and China will celebrate the 70th anniversary of diplomatic ties next year, both sides promised to work closely together to cover visits by leaders as well as the traditional friendship and achievement of cooperation between Vietnam and China.

In the afternoon, the Xinhua delegation visited the Vietnam Academy of Social Sciences./.