Hanoi (VNA) – The Quan Doi Nhan dan (People’s Army) daily and the Association of Vietnamese Soldiers and Experts in Laos held a symposium in Hanoi on October 23, stressing the inevitability and the need of the Vietnam-Laos combatant alliance. 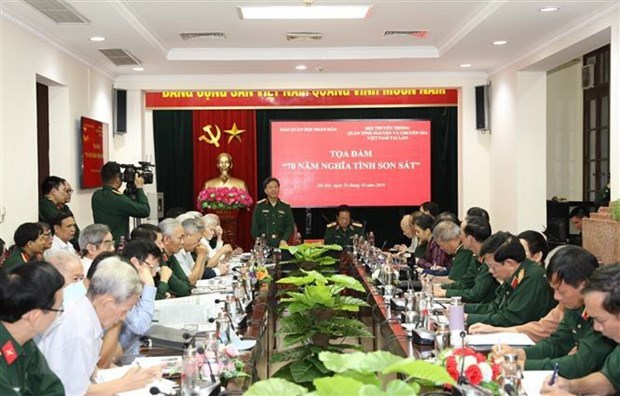 At the event (Photo: VNA)

The event, attended by representatives of the Lao Embassy in Vietnam, was held on the occasion of the 70th anniversary of the Traditional Day of Vietnamese Volunteer Soldiers and Experts in Laos.

Maj. Gen. Pham Van Huan, Editor-in-Chief of the newspaper, said the function created a chance to review major achievements, military exploits and contributions by Vietnamese volunteer soldiers and experts in Laos to the revolutionary causes of the two Parties and peoples.

In his letter to the participants, former Party General Secretary Le Kha Phieu affirmed that over the recent years, the relations of traditional friendship, special solidarity and comprehensive cooperation between the two countries have been continuously nurtured, consolidated and strengthened into an invaluable asset and a rule for successes in the national construction and development of each country.

The former leader also expressed his hope that the generations of Vietnamese volunteer soldiers and experts in Laos will continue bringing into full play their fine tradition to help consolidate and strengthen the friendship and special solidarity between the two Parties, States, peoples and armies.

Participants at the symposium affirmed that in the stages of the revolution, the Communist Party of Vietnam’s leadership and President Ho Chi Minh’s ideology that helping friends means self-help have always served as a compass for the military scientific way of thinking and revolutionary methodology of volunteer soldiers and experts helping the Lao revolution.

The bilateral relations are not only special but also exemplary for international conducts in the new era, they concluded./.