Hanoi (VNA) – Legislators will hear a report on the draft law on amendments and supplements to several articles of the Law on Cadres and Civil Servants and the Law on Public Employees at the 14th National Assembly (NA)’s eight session on October 24 morning. 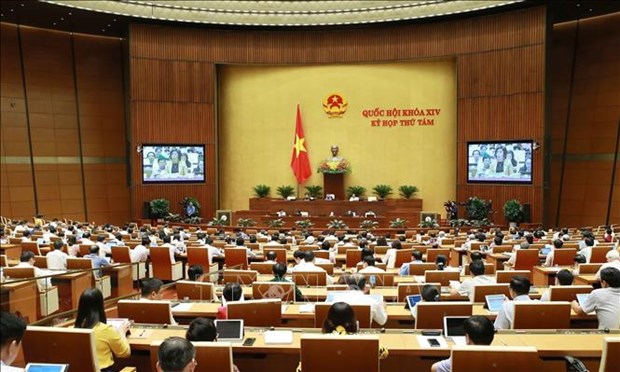 The report will be presented by member of the NA Standing Committee and Chairman of the NA Law Committee Nguyen Khac Dinh.

The draft law was discussed at the previous session, with the NA Standing Committee tasking relevant assessment and drafting units with taking into consideration comments collected at the event to complete the law.

At its 35th session, the NA Standing Committee further commented on the draft law and agreed with its scope of amendments and supplements. The body also agreed on content of the report on the draft law to be presented at the 8th session but recommended the clarification of a number of issues, including policy targeting talented people, initial examination of civil servants’ capacity, and punishment for retired or quitted personnel, among others.

In the afternoon, lawmakers will hear Minister of Planning and Investment Nguyen Chi Dung and Chairman of the NA’s Committee for Science, Technology and Environment Phan Xuan Dung delivering reports on the investment plan for the Ka Pet reservoir in Binh Thuan province’s Ham Thuan Nam district.

Transport Minister Nguyen Van The and Chairman of the NA’s Committee for Economic Affairs Vu Hong Thanh will present reports about the feasibility study of the Long Thanh international airport project’s first phase./.