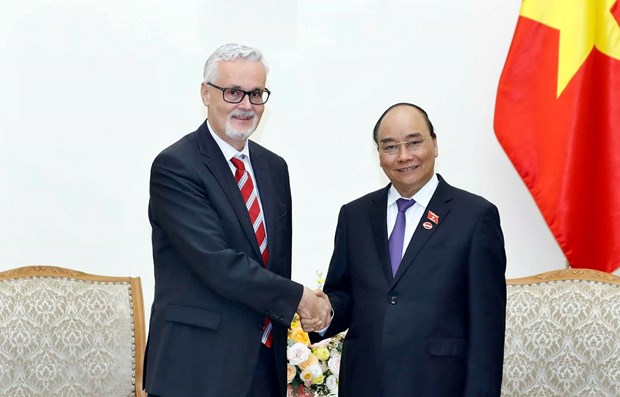 The PM believed that with his wealth of experience, the ambassador will make practical contributions to bilateral strategic partnership in the near future.

The Vietnamese government, ministries, agencies and localities are ready to create favourable conditions for the ambassador to fulfill assigned tasks, he said.

Hildner, for his part, lauded Vietnam as an important strategic partner of Germany and informed his host that four German delegations will visit Vietnam this week to carry forward coordination in economy, science and environment.

He suggested the two countries should further enhance ties in climate, environment, energy and vocational training.

The ambassador stressed that the recent signing of the EVFTA is a boon for Vietnam – Europe ties as well as Vietnam – Germany ties in particular.

The diplomat expressed Germany’s stance on supporting peace, stability, freedom, maritime and aviation security and safety in the East Sea in line with international law.

In his view, the two countries will have more cooperation opportunities when they both serve as non-permanent members of the United Nations Security Council for the 2020 – 2021 tenure, Vietnam becomes ASEAN Chair in 2020 and Germany takes up the rotating EU Chair in the second half of 2020.

PM Phuc proposed the two countries soon build a strategic action plan for the 2019 – 2021 term and work together in holding celebrations for the 45th anniversary of diplomatic ties next year, as well as facilitating the exchange of high-level visits.

The host asked Germany to push for the European Parliament’s ratification of EVFTA and the EU – Vietnam Investment Protection Agreement to benefit all sides.

He also called on German government and the EU to continue raising strong voice to support the settlement of disputes in the East Sea by peaceful means in line with international law, particularly the 1982 United Nations Convention on the Law of the Sea.

According to him, Germany has been the top trade partner of Vietnam for many years with a two-way trade of 10.8 billion USD last year. However, German investment in Vietnam still stays modest at roughly 2 billion USD, ranking fourth among European member states.

PM Phuc expressed hope that the ambassador will work with agencies concerned to promote investment ties./.