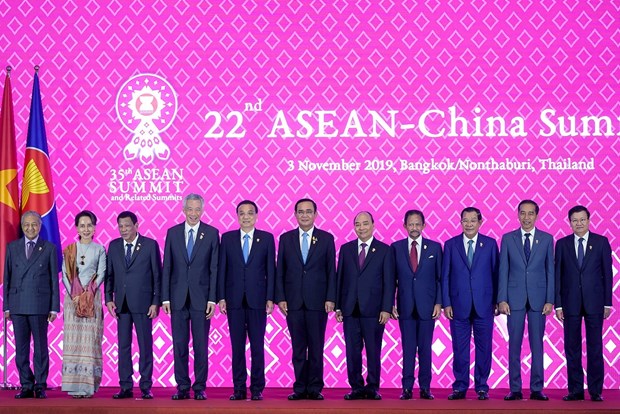 At the summit, the leaders underlined the importance of the ASEAN-China strategic partnership for peace, security, stability and prosperity in the region.

They reiterated efforts to promote dialogues and cooperation as well as building trust and soon finalising the Code of Conduct in the East Sea (COC).

The leaders also stressed the need to maintain peace, security, stability, freedom and safety of navigation and aviation in the East Sea and to refrain from actions that complicate the situation.

They agreed to abide by international law, including the 1982 United Nations Convention on the Law of the Sea (1982 UNCLOS), implement seriously and fully the Declaration on Conduct of Parties in the East Sea (DOC), and strive to build the East Sea into a region of peace, stability and cooperation.

Participants also welcomed the close economic ties between ASEAN and China, with China being the largest trading partner of ASEAN for the past 10 consecutive years and a leading investor of the bloc.

They vowed to contribute to the completion of the Regional Comprehensive Economic Partnership (RCEP) as scheduled.

Under the ASEAN-China Strategic Partnership Vision 2030 approved in 2018, the two sides pledged to promote cooperation in the fields of common interest such as trade and investment exchanges, including the effective implementation of the protocol to amend the ASEAN-China free trade agreement.

The two sides agreed to strive for a two-way trade of 1 trillion USD and investment of 150 billion USD by 2020.

They agreed to enhance connectivity between the implementation of the Master Plan on ASEAN Connectivity 2025 and China’s “one belt, one road” initiative, in addition to expanding people-to-people exchange and cooperation in tourism, innovation, e-commerce and digital economy.

Addressing the event, PM Phuc said ASEAN always attaches great importance to the role of China in endevours to maintain peace, security and stability for development cooperation and prosperity in the region.

He voiced support for the designation of 2020 as a digital economic cooperation year between ASEAN and China.

Regarding the East Sea issue, the PM affirmed that the maintenance of peace, security and stability in the world’s arterial maritime route is the responsibility of all nations for mutual benefits.

He reiterated the clear and consistent viewpoints of Vietnam on the East Sea situation, which have been presented at forums at various levels.

He urged the involved parties to step up efforts at both bilateral and multilateral levels to promote compliance with international law, including the (UNCLOS), as well as prevent the repetition of actions that run counter to international law, while creating a favourable environment for building rules and trust, promoting dialogues, and peacefully solving differences based on international law.

The PM also suggested implementing seriously and fully the DOC and maximising efforts to finalise the effective COC in line with international law and with the support of the international community.