Hanoi (VNA) – National Assembly Chairwoman Nguyen Thi Kim Ngan highlighted the traditional friendship between Vietnam and Armenia and expressed her hope that Vietnam and Armenia will continue working closely in organisations to which they both are members. 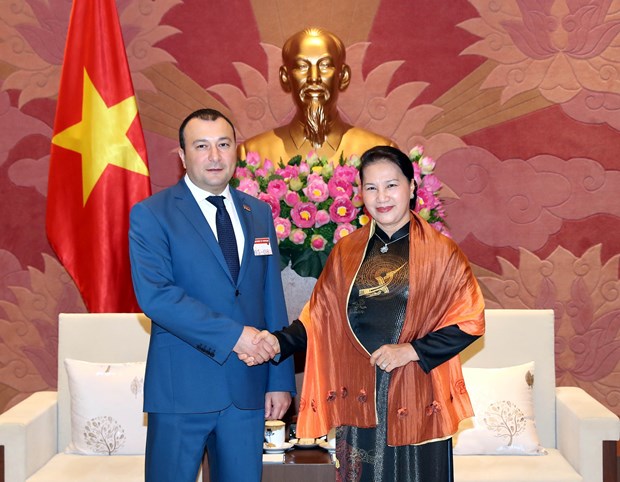 Speaking at a reception for Vice President of the Armenian National Assembly Vahe Enfiajyan in Hanoi on November 5, Ngan stressed that the Vietnamese legislative body is promoting parliamentary diplomacy with other countries, including traditional friends like Armenia.

She suggested that the two NAs should create conditions for their agencies to exchange experience in law building, and increase mutual visits to explore new potential for cooperation.

Chairwoman Ngan asked her guest to convey her invitation to visit Vietnam to President of the Armenian NA.

The Vice President of the Armenian NA, who is also Chairman of the Armenia-Vietnam Parliamentary Friendship Group, pledged that the group will do their best to further the cooperation between the two countries, particularly in the fields of politics and economy.

He affirmed that leaders and people of Armenia treasure the ties with Vietnam, hence the visit to Vietnam by the Armenian Prime Minister in July this year.

Vahe Enfiajyan stressed that the Armenian NA is willing to work with the Vietnamese counterpart to raise their partnership to a new level. He suggested that the Vietnamese NA set up a parliamentary friendship group with Armenia soon.

He conveyed to NA Chairwoman Ngan an invitation to visit Armenia from the President of the Armenian legislative body.

Also on November 5, the Armenian NA delegation attended as observers a plenary session of the Vietnamese legislature./.