Hanoi (VNA) – Vice President Dang Thi Ngoc Thinh on August 12 hosted a reception for an Indian delegation led by Pallab Sengupta, Politburo member of the Communist Party of India and General Secretary of the All India Peace and Solidarity Organisation (AIPSO). 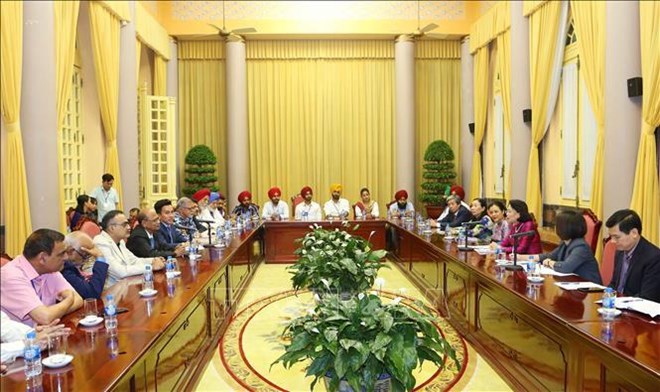 At the meeting (Photo: VNA)

Sengupta and his entourage are in Vietnam to attend the 10th Vietnam-India People’s Friendship Festival.

At the meeting, Thinh spoke highly of the role of people-to-people exchange in enhancing the friendship between the two countries, and lauded efforts by the Vietnam Union of Friendship Organisations, the Vietnam-India Friendship Association and the AIPSO in organising the festival.

The official expressed her hope that these organisations will make more contributions to materialising the Vietnam-India comprehensive strategic partnership, and consolidating and developing the bilateral friendship and cooperation.

Vietnam and India became strategic partners in 2007 and elevated their relationship to a comprehensive strategic partnership in 2016, Thinh noted, adding that India is one of Vietnam’s 10 biggest trade partners while Vietnam is one of the top priority partners in India’s Act East policy. She also expressed her delight at the all-round development of the bilateral friendship.

In reply, Sengupta said the bilateral cooperation is developing fruitfully in all spheres, ranging from economy, trade and investment to national defence and security, science, education, culture, tourism and agriculture.

India always attaches importance to relations with Vietnam, the guest said, expressing his hope that the two countries will step up people-to-people exchange in the time ahead in order to enhance solidarity and equality, and create favourable conditions for cultural and social development.-VNA