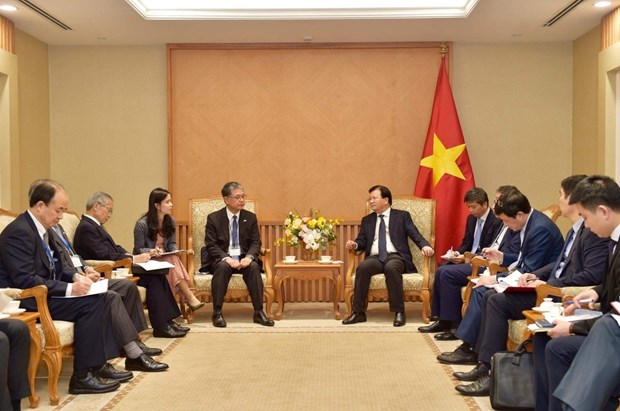 At the talks (Photo: VNA)

The Deputy PM said the Vietnam-Japan extensive strategic partnership is developing fruitfully on the basis of the consolidated political trust, and the two countries have become leading partners in economy, trade and investment.

Japan’s investment projects have significantly contributed to socio-economic development and job generation in Vietnam, Dung said, adding that Japan ranks second among countries and territories investing in the Southeast Asian nation, with more than 4,300 projects valued at nearly 60 billion USD.

The official lauded contributions of Yoshiki and other FEC members to promoting cooperation and friendship between Vietnam and Japan over the past years, including the organisation of many business delegations to Vietnam since 2011.

For his part, Onoi said he is impressed by Vietnam’s economic development over the past time, and pledged to make more efforts to contribute to the country’s development through people-to-people diplomacy.

The council will organise more trips for Japanese businesses to Vietnam to seek investment opportunities, support Vietnamese investors in Japan and hold people-to-people exchanges, he said./.