Hanoi (VNA) – Vietnam attaches much importance to the relations with Germany, its key partner in the Europe as well as the European Union (EU), Deputy Prime Minister and Minister of Foreign Affairs Pham Binh Minh said on December 5. 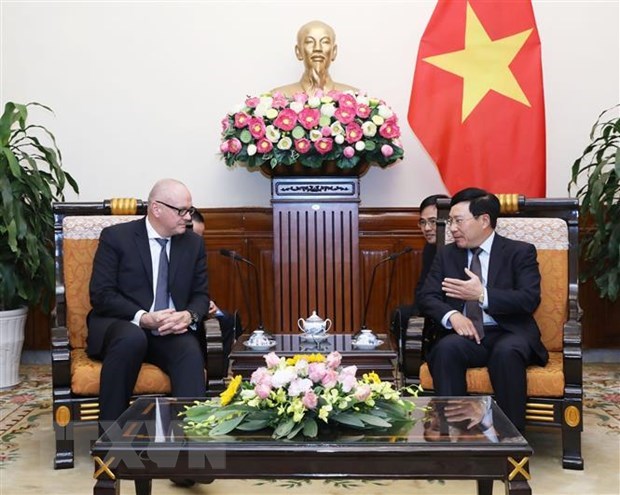 Receiving State Secretary of the German Federal Foreign Office Andreas Michaelis, Deputy PM Minh hailed the outcomes of the fifth meeting of the Vietnam – Germany Strategic Management Group, with the adoption of the Plan of Action for the 2019-2020 period, and various cooperative agreements in the fields of politics, security, defence and labour, among others.

He said that the strategic partnership between the two nations lays solid foundation for them to step up ties in the time ahead, particularly in economy, trade and investment.

He expressed his hope that Germany, playing a leading role in the EU, will work to accelerate the approval of the EU – Vietnam Free Trade Agreement (EVFTA) and the Investment Protection Agreement (IPA), making contributions to facilitating trade between Vietnam and Germany and the EU as a whole.

Andreas Michaelis, for his part, said he rejoiced at the fruitful Vietnam – Germany strategic partnership, affirming efforts to elevate the relations to a new high in the future.

Germany endorses the Vietnam – EU relations as well as the ratification of the EVFTA and IPA, he said, wishing both sides will closely coordinate at international organisations and forums, particularly when they are both serving as non-permanent members of the UN Security Council during 2020-2021, Vietnam will perform the role of the ASEAN Chair 2020, and Germany will hold the EU presidency in the second half of 2020.

He also stated that Germany supports the maintenance of order in the East Sea via peaceful means and with respect for international law./.