HCM City (VNA) – The victory against the US on April 30, 1975, is a vivid demonstration of the super power of the Vietnamese people under the leadership of the late President Ho Chi Minh in fighting against foreign invaders, a symposium in HCM City on July 8 heard. 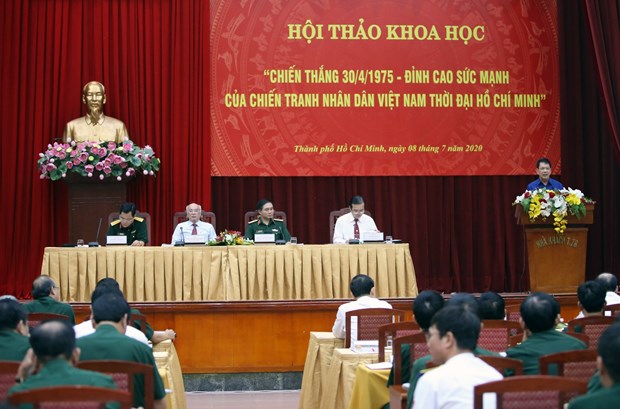 At the symposium (Photo: VNA)

Lt. Gen. Nguyen Tan Cuong, Deputy Minister of National Defence, highlighted the strategic vision of the Politburo, the Party Central Military Commission, and the Commander-in-Chief, which contributed to the triumph and national reunification.

He described the moment as the greatest and most complete victory that ended 21 years of Vietnam’s arduous resistance war against the US, liberating the south of Vietnam and leading to national reunification.

That victory opened up a new era of independence, freedom, and reunification for Vietnam to head towards socialism and greater affluence, strength, democracy, justice, and civility, he said.

More than 80 reports were submitted to the symposium. Participants focused on discussing the creative leadership of the Vietnamese Party led by President Ho Chi Minh in the war against the US and particularly the General Offensive and Uprising of the Spring 1975 as well as the power of the Vietnamese people in fighting against foreign invaders./.