Hanoi (VNA) – The Party, State, and people will forever bear in mind the great devotion of and sacrifice by generations of youth volunteers, Prime Minister Nguyen Xuan Phuc said at a ceremony on July 14 to mark the 70th anniversary of the Vietnamese Youth Volunteer Force (July 15). 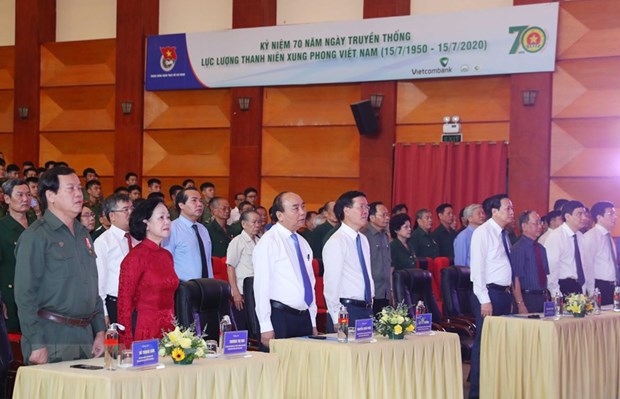 At the ceremony (Photo: VNA)

He asked the Ho Chi Minh Communist Youth Union Central Committee, the Vietnam Ex-Youth Volunteers Association, and related agencies to care for the lives of ex-youth volunteers and promote the operational efficiency of the force in the new era.

He ordered a review of policies on youth volunteers to facilitate the force’s participation in socio-economic development activities, especially in remote, border, island, and underprivileged areas, the PM said.

He urged all-level Party committees, authorities, the HCM Communist Youth Union, and related organisations to better their communications efforts and teaching the young generation about patriotism.

The PM expressed his hope that Vietnamese youth will prove their role in national construction and defence with various revolutionary movements.

On this occasion, 70 outstanding youth volunteers from different periods who greatly contributed to the development of their locality and unit were honoured.

Some 70 savings books and 21 houses were also presented to ex-youth volunteers now in difficult circumstances.

Statistics show that more than 6,700 youth volunteers laid down their lives during wartime while over 40,400 were wounded and some 14,000 affected by Agent Orange/dioxins./.