Farmers in the Mekong Delta are taking measures to adapt to low levels of flooding this year by switching to new crops and using other cultivation methods. 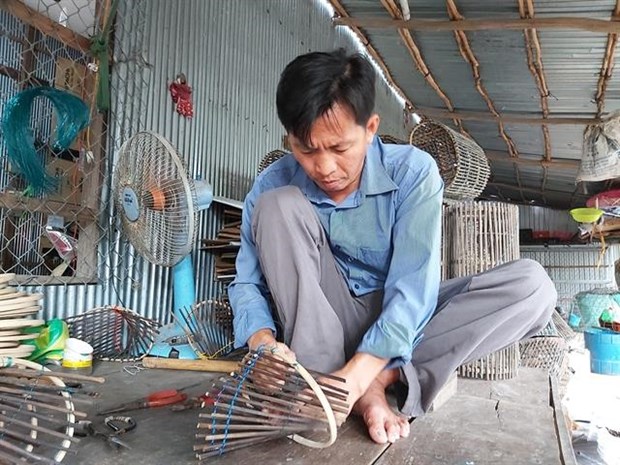 Nguyen Quoc Viet in An Giang province’s An Phu district makes crab-catching traps to sell to fishermen in the Mekong Delta and Cambodia during the flooding season (Photo: VNA)
HCM City (VNA) – Farmers in the Mekong Delta are taking measures to adapt to low levels of flooding this year by switching to new crops and using other cultivation methods.

The delta’s annual floods, which are caused by the rising water levels of the Mekong River in the rainy season, have been lower than usual this year.

Besides its impact on agricultural production in these typically flooded areas, the delta’s annual floods bring sediment to fertile fields as well as wild fish and other aquatic species from the upper areas of the Mekong River.

During this period, farmers can also breed aquatic species in flooded rice fields or grow other aquatic crops.

However, this year, the flood waters in Dong Thap and An Giang, the delta’s two upstream provinces, have been lower than in previous years.

In Dong Thap, the water levels at observation stations in mid-August were 0.5 – 2 metres lower than the same period last year, according to the Dong Thap Centre of Hydro-Meteorology Forecasting.

The water level in early this month was estimated to reach 2.66 metres on the Tien River at the Tan Chau Station and 2.36 metres on the Hau River at the Chau Doc Station in An Giang, according to the National Centre of Hydro-Meteorology Forecasting.

Earlier, the centre said that big floods this year would not occur because of low rainfall.

Many farmers have not been able to breed aquatic species in rice fields because of the low level of floods.

However, he now has to breed the shrimp on a 3 ha nursing pond because flood waters have not flowed into his rice fields.

If flood waters come late or if there is no flood, he will pump water and use equipment to supply additional oxygen, as well as use industrial feed, to breed shrimp in the 3ha pond.

However, this farming method increases production costs and the shrimp grow more slowly than shrimp bred in flooded fields where they eat natural food.

In Hong Ngu town’s Binh Thanh commune, rice fields now have no flood water, but last year during the same period fields were covered with two-metre high floods, according to farmers.

Fishermen in the delta’s upstream provinces are also experiencing a poor catch of fish and other aquatic species because of the low level of floods.

In An Giang province’s An Phu district, Nhon Hoi commune has about 100 households that make a living on catching aquatic species, especially Siamese mud carps, a specialty of the flooding season, according to the commune’s Farmers Association.

Mai Van Hai, who has caught Siamese mud carps for 30 years in Nhon Hoi, said he had caught about 10 kilos of the fish daily in late August last year, but has only caught only one-half kilo of the fish daily this year during the same period.

Craft villages that make tools for catching fish and other aquatic species have had to reduce their production because of low demand for the tools.

Nguyen Quoc Viet in Nhon Hoi said in previous years he could earn a livelihood from making crab-catching traps to sell to fishermen in the delta during the flooding season.

He normally sells about 700 crab-catching traps in big flood seasons and earns a profit of 14 million VND (600 USD) each season.

However, during this flood season he has only sold 300 crab-catching traps and most of the buyers are fishermen from Cambodia.

Many labourers in the commune have gone to big cities to find jobs, he said.

Many farmers this year have switched from rice or aquatic species to grow lotus and water caltrop and other crops that do not require too much water.

“Small and big floods do not affect lotus cultivation,” he said.

The delta’s upstream provinces have launched programmes to provide livelihoods for farmers in these typically flood-prone areas.

Vo Thanh Ngoan, Deputy Director of the Dong Thap Department of Agriculture and Rural Development, said the province’s agencies have improved the forecasting of flood levels.

Dong Thap has long-term plans to adapt to climate change so farmers can work during the flood as well as dry season, he said.

The province has turned ineffective rice fields to zones where other high value crops and fruits can be grown. It has also provided advanced farming techniques to farmers.

An Giang has plans to switch from crops that require high levels of water to crops that need much less.

Truong Kien Tho, Deputy Director of the An Giang Department of Agriculture and Rural Development, said the province has called on companies to promote high-tech farming and support farmers in these areas to switch to crops that require less water.-VNS/VNA