Deputy PM urges construction of houses for the poor

Hanoi (VNA) – Deputy Prime Minister Vuong Dinh Hue has suggested using funds from the 2019 Fund for the Poor to replace makeshift residences with brick houses by the end of the year, especially for households with family members that made contributions to the national independence and reunification. 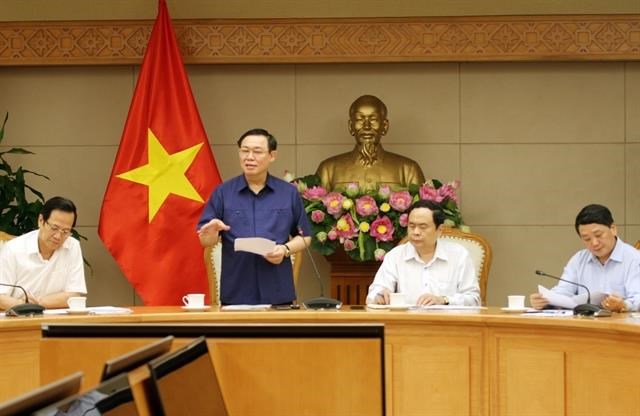 Deputy Prime Minister Vuong Dinh Hue at a meeting held on August 7 to prepare for the charity programme entitled “Joining hands for the poor”, which will be aired live on October 17 .(Photo: VNA)

He made the statement at a meeting to prepare for the charity programme “Joining hands for the poor” which will be held on October 17 in response to Prime Minister Nguyen Xuan Phuc’s appeal to leave nobody behind.

The event, which will be broadcast live on Vietnam Television, aims to honour local and international individuals and organisations which have supported needy people, joined charitable activities and contributed to the Fund for the Poor.

According to Hau A Lenh, Vice President of the Vietnam Fatherland Front (VFF) Central Committee, the programme raised nearly 945 billion VND (40.8 million USD) for the poor in 2018.

By the end of July this year, the Fund for the Poor had raised more than 43.8 billion VND (1.9 million USD), and other activities are ongoing to support communities in need.

The money has been used to build and repair over 18,600 houses for impoverished households across the country and to implement thousands of projects and social welfare programmes targeting the disadvantaged.

“The programme proves that efforts are spread across the whole society, having a deep sense of humanity and social security. It will express our country’s moral tradition la lanh dum la rach (the intact leaves protect tattered ones), contributing to helping the poor escape from poverty,” said Tran Thanh Man, President of the VFF Central Commitee.

Nationwide, the number of households suffering from a shortage of food has reduced by 31.7 percent over the past seven months.

He attributed the positive results to the efforts made by the central Government, localities and the whole society as well as the fact that there were fewer natural disasters compared with previous years.

“It also signals that poverty reduction work has been more sustainable than before,” Dung said.

He proposed spending about 40 billion VND left over from the 2018 Fund for the Poor to build and repair about 1,000 houses starting in October so that poor people could welcome the New Year in a safe, new house.

The minister said there were currently 900,000 blind and 1.1 million deaf people, of which about 400,000 were in position of chronic poverty. Two enterprises have offered to provide free smart phones for deaf and visually impaired people equipped with software to make them easier to use.

Deputy PM Hue, who is also head of the Steering Committee for the National Target Programme for 2016-2020, agreed with a proposal to launch the fundraising text message campaign for the programme earlier than usual, on August 19 instead of October 1 as previously planned. The campaign will last three months to gather more donations. People can donate by sending a text message to the National Humanity Portal at 1400.

The Ministry of Information and Communications was instructed to work with communications companies to help the text message campaign run smoothly.-VNA