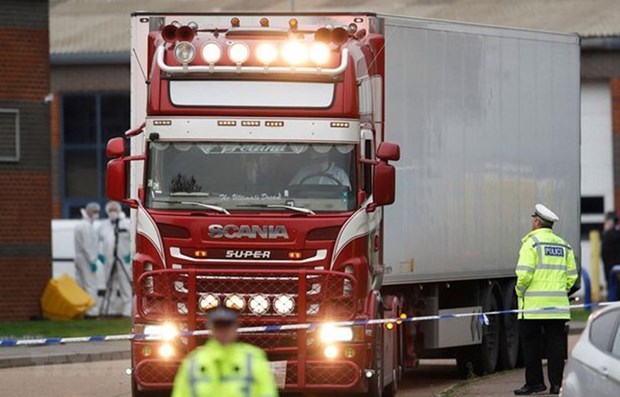 At the scene of the tragedy in which 39 people were found dead in a container in Essex country of the UK (Photo: Reuters/VNA)

He quoted a Government report as saying that on October 23, British police announced that 39 people were found dead in a container in Essex countyand they supposed that the victims were Chinese. However, on October 25, the police said they were not sure about nationalities of the victims.

After learning of the information that the victims may include Vietnamese, on October 26, the Vietnamese Ministry of Foreign Affairs issued a statement affirming the readiness to take citizen protection measures if there is any Vietnamese in the case.

On October 29, the British side handed over to Vietnam dossiers and finger prints of all 39 victims as part of the efforts to determine their nationalities and names.

On November 2-3, a delegation from the Ministry of Public Security and the Ministry of Foreign Affairs worked with British authorities on the case, but the final announcement on the nationalities and names of the victims has yet to be released.

He has also asked the ministries to directly update families of the victims with relevant information and help them in organising funeral.

The PM also requested the Ministry of Information and Communications to alert the community on criminal rings of illegal migration, and refute wrongful information on the case.

On November 3, the Government held a meeting with ministries, sectors and localities to discuss a plan to receive bodies of the victims from the UK.

After listening to the report, Vice NA Chairman Uong Chu Luu, on behalf of the NA, extended his deepest condolencesto the bereaved families.

The NA has asked the Government, ministries, sectors and localities to work closely with relevant parties to promptly clarify the case and implement citizen protection measures, he said, adding that the Ministry of Public Security has been asked to bust illegal migration rings and apply measures to effectively prevent the crime./.