Hanoi (VNA) – Complying with the 1982 UN Convention on the Law of the Sea (UNCLOS) and promoting the ASEAN’s central role are a policy choice of Vietnam in settling disputes in the South China Sea (called the East Sea in Vietnam), said a local official. 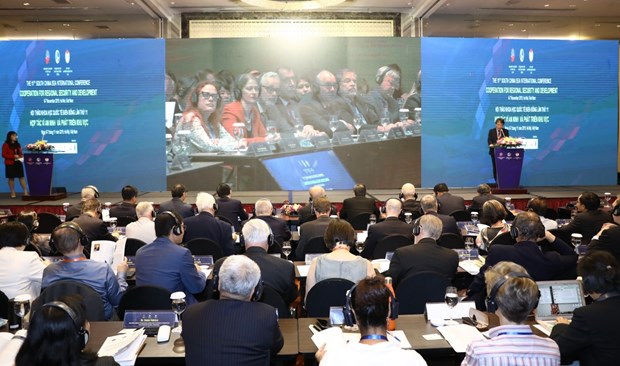 An overview of the conference (Photo: VNA)

In his closing speech at the 11th South China Sea International Conference in Hanoi on November 7, President of the Diplomatic Academy of Vietnam (DAV) Nguyen Vu Tung said the 1982 UNCLOS remains an important foundation for solutions to the South China Sea issues.

According to the official, participants held that multilateralism persists although it is facing challenges, especially in issues regarding the South China Sea. Multilateralism and the world’s order would confront bigger challenges if international law, including the 1982 UNCLOS, was not respected.

Delegates spent much time debating competition among world powers in the region and behaviour and activities of major stakeholders such as the US, Japan, the Republic of Korea, India, Australia, New Zealand and the European Union, Tung said.

They also mentioned China – the biggest claimant in the South China Sea and an emerging power in the region, saying that Beijing was expected to be the biggest stakeholder in the settlement of disputes in the waters, he added.

The 11th South China Sea International Conference with the theme of “Cooperation for regional security and development” was co-hosted by the Diplomatic Academy of Vietnam, the Foundation for East Sea Studies (FESS) and the Vietnam Lawyers Association (VLA), bringing together around 50 speakers and 250 officials, scholars and diplomats of Vietnam and foreign countries.

For the past decade, since its first edition in 2009, the conference has become one of the most prominent forums which have gathered leading experts to brainstorm a wide range of issues from maritime security, international law, marine-based economic development, and marine ecology, which are deemed important to regional peace, development and environmental sustainability./.