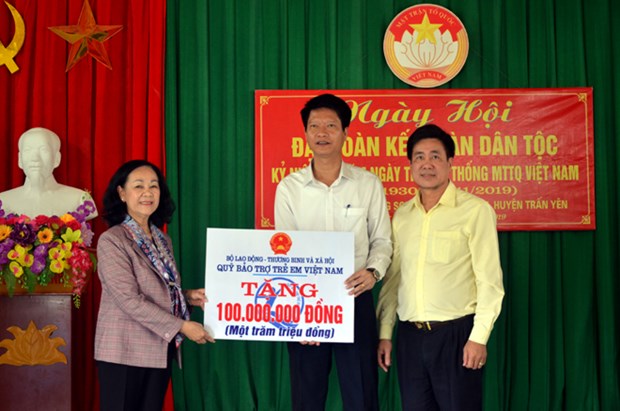 Up to 96 percent of Dong Song hamlet’s population are Dao ethnic minority people. It has been recognised as a cultural hamlet with 86.4 percent of households earning the cultural status. In 2019, the hamelt’s poverty rate dropped to 4.6 percent and income per capita reached 35.34 million VND (1,520 USD) per year.

Tan An is a typical street in Ninh Binh city, where 168 families live. This year, the street reported no criminal offencers, no domestic violence case and no child dropping out of school. The street has been kept clean and green and installed with public lighting and security cameras by its residents.

Addressing the festival, Thinh hailed the street’s households for their achievements and urged the local authorities at all levels to further support the residents to reduce poverty sustainably, develop business and improve living standard.

She later presented 30 gift packages to cultural families and 30 scholarships for local students.

Minister-Chairman of the Government’s Committee for Ethnic Affairs Do Van Chien also participated in a similar event of Voong Tre village in Binh Dan commune, Van Don district, the northern province of Quang Ninh, where over 95 percent of the population are from San Diu ethnic minority group./.