Bangkok (VNA) – A delegation of the Vietnam Journalists Association (VJA) paid a working visit to Thailand from November 25 to December 1. 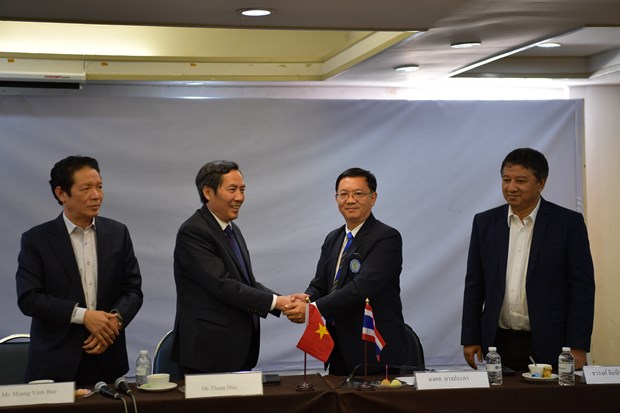 Receiving the delegation, Thai Deputy Prime Minister and Minister of Commerce Jurin Laksanawisit affirmed his country’s support for Vietnam’s hosting of ASEAN summits and related meetings in 2020, expressing his belief that the country will successfully serve as ASEAN Chair next year.

He also highly valued the cooperation between the Confederation of Thai Journalists (CTJ) and the VJA in the recent past.

At the talks with the VJA delegation, CTJ President Mongkol Bangprapa, who is also head of the Confederation of ASEAN Journalists, spoke highly of the VJA’s effective activities, especially when the association was in the chairmanship of the Confederation of ASEAN Journalists between 2015 and 2018, which he said have greatly contributed to Vietnam-Thailand relations, as well as Vietnam-ASEAN ties.

He noted cooperation between the CTJ and the VJA has continually been enhanced over the last more than 20 years. They have frequently exchanged delegations at all levels and coordinated well in relevant issues.

Mongkol asked the two sides to work closely together at upcoming events like ASEAN summits and related meetings in 2020, when Vietnam acts as ASEAN Chair.

For his part, VJA Chairman Thuan Huu, who is also deputy head of the Party Central Committee’s Information and Education Commission, said the two organisations have always cooperated closely with each other in bilateral and ASEAN-related issues, thereby helping to increase mutual understanding and exchange between the two countries’ press agencies and people.

Huu invited CTJ leaders and members to attend the award ceremony of a writing contest on agriculture, farmers and rural areas for ASEAN journalists to be held in Vietnam in early 2020. He also invited the Thai media to report on ASEAN summits and related meetings in Vietnam next year.

At the talks, the two organisations reviewed their memorandum of understanding that was signed in 2015 and will expire at the end of 2020. They stressed that they will step up all-level delegation exchanges, further report on each country’s situation, expand cooperation to newspapers of sectors and localities, and open more Vietnamese and Thai language courses for each other’s reporters./.