Geneva (VNA) – A Vietnamese delegation is taking part in the 22nd General Assembly of the International Federation of Red Cross and Red Crescent Societies (IFRC) that opened in Geneva, Switzerland, on December 5. 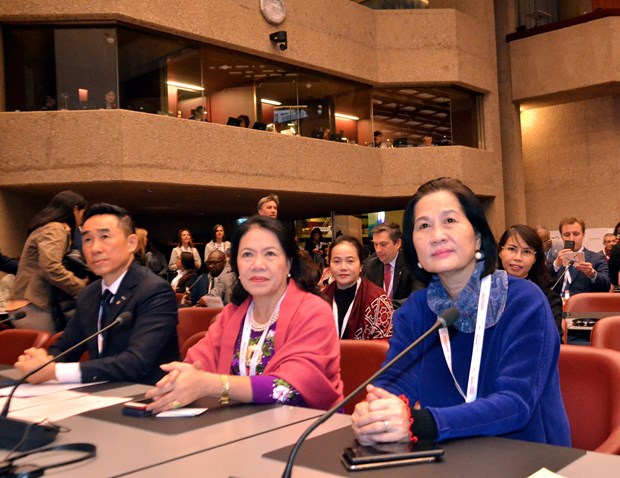 The Vietnamese delegation at the 22nd General Assembly of the International Federation of Red Cross and Red Crescent Societies (Photo: VNA)

The delegation is being led by President of the Vietnam Red Cross Society Nguyen Thi Xuan Thu.

The event is looking at the IRFC Secretariat’s plan and budget for 2015-2020 and has already approved three new important programmes, namely the use of cash transfer in livelihoods programmes; integrating protection, gender and education in the IRFC’s programmes; and increasing communication about humanitarian values.

Addressing the event, IFRC President Francesco Rocca stressed that: “The message from our members and from our millions of volunteers couldn’t be clearer: climate change is an existential threat that is already completely altering the work we do, and the lives of the people we support.”

The general assembly highly valued the effective contributions of over 14 million Red Cross and Red Crescent volunteers around the world to disaster response, health care, social assistance, and support for vulnerable groups.

The meeting is set to adopt the IFRC’s Strategy 2030 and discuss the One Billion Coalition, along with issues relevant to migration, urbanisation, and support for civilians in armed conflicts and disasters.

Also at this session, the Marshall Islands and Bhutan red cross societies were admitted to the federation, raising the IRFC’s membership to 192./.