HCM City (VNA) – Ho Chi Minh City has been sending workers abroad under various programmes in recent years, but challenges still exist, especially in training, according to the municipal Department of Labour, Invalid and Social Affairs. 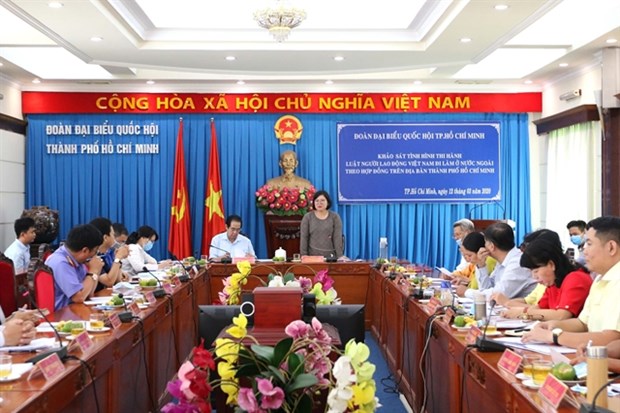 Delegates from the National Assembly in HCM City meet representatives from enterprises to address problems related to labour export (Photo: VNA)
Le Minh Tan, director of the department, said that most workers who have returned after the expiration of their contracts had saved a large amount of money and were using it to do business and upgrade their accommodations.

Many of them have also found jobs. More than 4,915 people worked abroad within the 2015-2019 period, mostly in Japan, Taiwan, the Republic of Korea and others.

As many as 86 enterprises and branches in the city send workers abroad, but several enterprises have recruited a large number of workers who have not been trained to work abroad.

These workers later failed to meet the demands of highly skilled jobs.

Le Long Son, Director of Esuhai Co. Ltd, said that many labour export enterprises did not have long-term strategies for market development and brand name building.

The situation has led to unhealthy competition, leading to high costs for workers and poor reputation for labour export enterprises.

Son suggested that they should focus on skilled workers to meet enterprises’ high demands.

Representatives of other enterprises also suggested that relevant agencies should amend policies and administrative procedures related to issuing new business certificates and change them.

Labour divisions in the city’s outlying districts of Cu Chi, Hoc Mon and 12 said that a framework for cooperation between enterprises and local authorities should be issued to create favourable conditions for management.

The labour department petitioned the Ministry of Labour, Invalid and Social Affairs to give management rights over activities related to labour export to people’s committees in provinces and cities.