Hanoi (VNA) – A list of 23 players of Vietnam’s national football team for the match against Thailand in the 2022 FIFA World Cup qualifiers on September 5 has been announced. 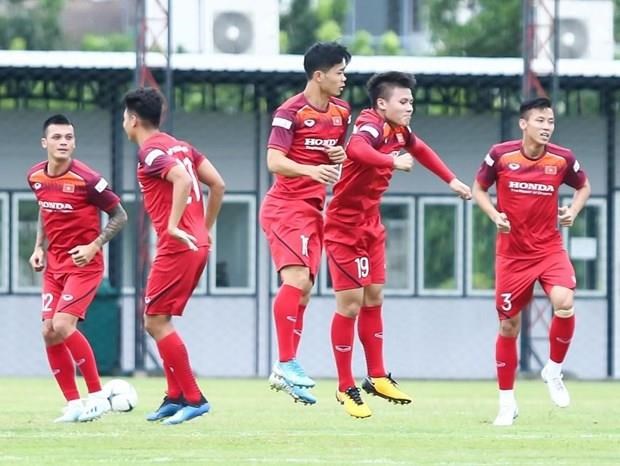 Members of the Vietnamese squad in a training session ahead of the match against Thailand (Photo: VNA)
Dang Van Lam of Muangthong United, Nguyen Tuan Manh of Khanh Hoa and Pham Van Cuong of Quang Nam FC will serve as the team’s goalkeepers.

The Vietnam-Thailand match will kick off at 7:00 pm at the Thammasat University Stadium in Pathum Thani province, 40 km from Bangkok.

The 2022 FIFA World Cup’s second qualifying round for Asia features 40 teams, divided into eight groups of five teams, playing in the home-away format.

Vietnam have been drawn in Group G with regional rivals Thailand, Malaysia and Indonesia, as well as group favourites the United Arab Emirates (UAE).

The eight group winners and four best runners-up will qualify for the AFC Asian Cup 2023 to be held in China as well as the third and final round of World Cup qualifiers.–VNA