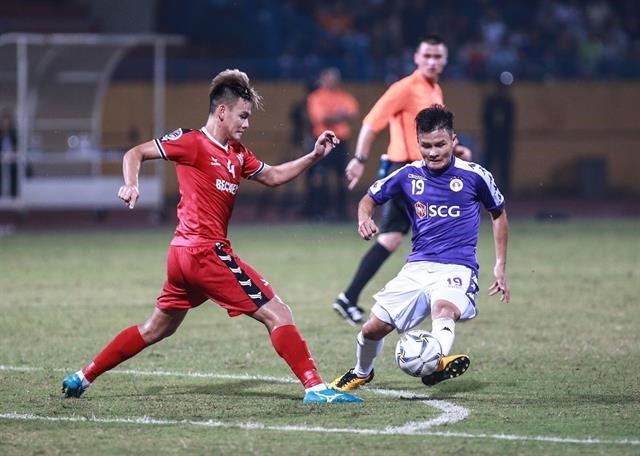 Midfielder Nguyen Quang Hai of Hanoi FC (right) vies for the ball with a player from Binh Duong in the second leg of the AFC Cup ASEAN Zonal final at Hang Day Stadium in Hanoi on August 7. (Photo: VNA)

Both sides started the match aggressively and created a number of chances but failed to find the net.

The hosts continued to pile on pressure but could not find a way past Binh Duong’s solid defence.

Despite opportunities to take the lead, the first half ended goalless.

After the break the home side were on the front foot again and Pape Omar Faye broke the deadlock on 61 minutes.

Goalkeeper Truong came out to claim a corner kick sent in by Nguyen Thanh Chung but the ball slipped through his hands and Faye took full advantage, sending the ball into the net with a first-time finish. This was his eighth goal of the competition.

Truong struggled again several minutes later when he failed to hold on to a shot from the top of the box, but the ensuing chance slipped by the outside of the post.

Binh Duong seemed deflated following the goal and the hosts were able to calmly defend their lead.

Following the win, Hanoi will play Altyn Asyr from Turkmenistan in the inter-zone semi-finals across two legs on August 20 and 27.-VNA